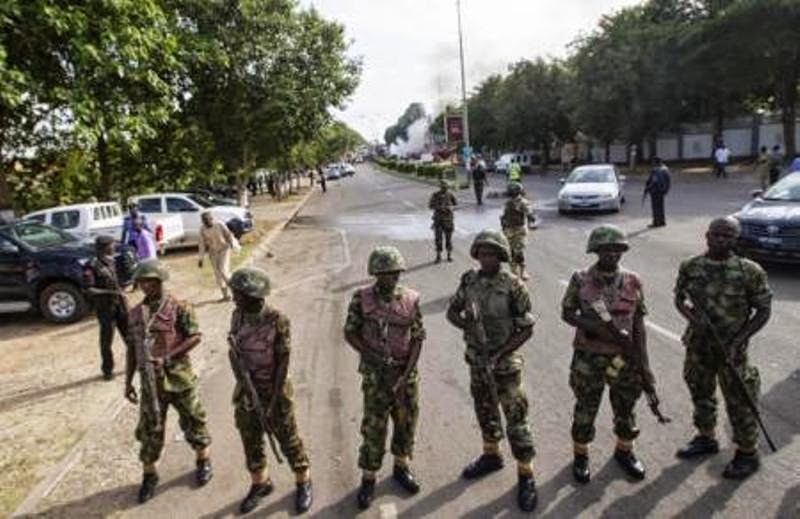 Pandemonium broke lose as some men of the Nigeria Army from the 31 Artillery Brigade on Tuesday invaded the Hill Top Model Secondary School, Minna, the Niger State capital.

The army officer and his subordinates invaded the school few hours after the students’ daily assembly, holding teachers and students hostage. They disrupted academic activities for the whole day. They whisked away a student believed to be an officer’s girlfriend.

It was gathered that the officers and men who stormed the school premises were armed with AK 47
riffles. They arrived in a Mitsubishi Hilux pickup, with registration number: 31 AB 035 NA.

The Eagle Online further gathered that the soldiers came on the invitation of one Umar Alhassan, a civilian, who happens to be a friend of one of the Army officers who removed the tags bearing their names because of their “unofficial” presence in the school.

A teacher with the school, Mohammed Mamud said that at about 8am, Alhassan, wearing military fatigue, drove into the school in a black Nissan Jeep, with registration number: Niger AA 551 KUG.
Mamud said Alhassan came on the invitation of one Farida Mustapha, a Senior Secondary School female student of the school, who was punished by a teacher over an offence.

He explained that the teacher was having a lesson with Farida’s class when an unknown student used an abusive language. And since nobody owned up to the misbehaviour, the teacher punished the whole class, including Farida.

The teacher confirmed that Alhassan came to the school to intimidate the teacher over the general punishment involving his girlfriend, Farida.

Also speaking, the Principal of the School, Bala Mohammed, said:
“Umar Alhassan drove into the school in a reckless way.
“We thank God that the students were not on break, else he would have knocked at least one down.
“I cannot talk to journalists now until I get permission from the state Commissioner for Education, Alhaji Danladi Abdulhameed.
“But I have invited the Zonal Inspector and he is on the way to the school to see things for himself.”
When the Zonal Inspector, Mohammed Gambo, arrived, he told newsmen that he was at the school to investigate the incident before briefing them.

According to Gambo: “We will do our best to get to the root of the matter, I assure you.”
The army officers and men who refused to talk to journalists hurriedly put Alhassan in their vehicle and drove away.

All efforts to reach the Public Relations officer of the 31 Artillery Brigade of the Nigeria Army, Minna proved abortive. His phone was not going through as at the time of filing this report, reports online news portal,

[Reported By The Eagle Online]