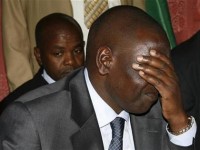 Your Excellency Mr President, I am writing this letter to you with grave concern about how your security agents are harassing, beating, torturing, detaining, deporting and even killing innocent people in this country.
Some deadly squad going round to pick people, beat them, threatened them with death, deport and write lies about them in the media, spoilling their names without haven done any wrong, just on mere suspicion, this is absolutely a gross violation of human rights.

I am letting you and the world know this as a victim of this barbaric acts in the hands of this people who called themselves NIS. I am only lucky to be alive today. The constitution of Kenya state clearly, no one shall be detained beyond 24 hours without been taken to the court of law, I was detained for 15 days without any charge, no wrong doings, no record of any offence, beaten, tortured, and deported with a warning of never to return to Kenya or else I will be killed. Some are still been held somewhere call ICD off Mombasa road as I writes.

My question to you your excellency, “What is the work of kenyan courts and the judiciary system”? If some people can go round like this, abduct people, beat them, detain them, deport them and even kill them all without the court of law and the judiciary. This leave many people wonder why do kenya have courts of law. Innocent people been arrested and deported without the knowledge of the immigration or the courts, what a shame??? In a civilized world.

I am sure this is not your order or directives or that of your government. You once lived in the United States, your late father, the first president of independent kenya once lived in the United Kingdom, today many kenyans are living in countries around the world. How would you feel to hear kenyans been treated inhumanly in this same way and manner your people are treating others in kenya? If the white people can treat us with dignity and respect, how can we Africans treat ourselves in this way, feeding our brothers to the hyenas the way this people almost did to me if not for God’s intervention.

Your excellency, in your just concluded iCC case, we were all saying, one is innocent untill proven guilty in the court of law, how come in kenya reverse is the case? Or have we suddenly returned to animal farm of Geoge Owell? Where all animals are said to be equal, while some are more equal than the other. One can be sentenced to death without trial by some group of people claiming its an order from above.
If these people are actually agents of the state, I want to believe they are defeated to fight insecurity in kenya, in order for them to keep their jobs, they must deceive you and the entire nation that they are working by doing this to harmless innocent people. The real drug lords and financiers of terrorism are there untouchable.

Your excellency, you need to get rid of this people liers and deceits before they tarnished your name and that of your government. So many people have been accused wrongly of been drug lords and suspected terrorist, arrested and deported only to take their properties in Nairobi and Mombasa, surely is this the best way to fight crimes and terrorism?

Mr President what legacy do you want to leave behind? Leaders come and go, legacy is very important. What do you want to be remembered for? at the end of the day you will be remembered, the choice is yours. Your excellency, I want you to tell me if this people are in order to deport me and threatened to kill me if I ever returned to kenya.

I am married to a Kenyan legally for 19 years now with 4 children, I have never committed any crime, never been charged for any crime, never been found with any thing incriminating, with friends and relatives in kenya, is it justified that I can not visit kenya again or else risk been killed?

Thanks your excellency for taken your time to read this.