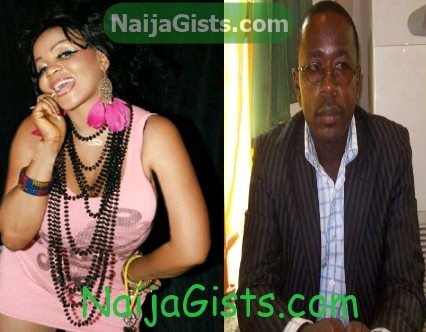 Highly controversial Nollywood actress Cossy Orjiakor who has turned herself into a p**nstar all because of fame is currently in another scandal. naijagists.com

Few days ago, a blogger who got offended with very irritating naked pictures of Cossy Orjiakor circulating the internet wrote a candid open letter to Cossy and Tonto Dikeh.

Cossy Orjiakor didn’t spare the woman a moment, she immediately replied her calling her a nonentity. She even claimed she is making waves for Nigeria with her nude photos.

In another development, another male Nigerian blogger by the name of Simon Ateba has also warned the actress.

See the letter below.

Dear Cossy Orjiakor,
It’s not because of your large b**bs that I write this open letter to you. It’s not even because of the damage your 38DD breasts have caused to Nigerian youths as the big b**bs keep falling off your bra and struggle to stick to your innocent chest. It is because of the unattractive n**e pictures you released recently on Twitter and the arrogant posture you unreasonably exhibited towards well-intentioned critics.

True, it is a well known fact that you are the Nigerian actress with the largest boobs in Nollywood, a maverick star who has successfully demonstrated over the years that there is no difference between private and public ‘assets’.
However what was offensive to me and many guys was not the nude pictures you deliberately released on Twitter.

It was the shocking reality that you are not really attractive with your clothes off. You are better off and really glittering when you have them on. Looking closely at the pictures you released, I realised that your ‘ass’ was too fat and your body is in great need of some serious physical exercises.

It was also the misjudgement from your part that most guys are attracted to every naked woman and that sex sells always, especially in Nollywood where there seems to be no ethical standards.

It does not have to be that way. You can be a great actress with your clothes on. You can be decent and still get to the top and influence generations. Just look around you. There are a few decent actresses who are doing well and have earned our respect not because of their nudity but because of their performance and positive influence.

Look at Genevieve or Kate or Damasus. They do not need to go nude to hit it big. Though their relationships have also crashed, but they have earned our respect.

Finally, I was flabbergasted that you called a fellow blogger, Ngozi Kanwiro, a nonentity and described yourself as a celebrity. The fellow blogger is full of dignity. She is a decent person who is having a better influence on Nigerian youths. At least she does not appear like a prostitute pretending to be an actress. Not saying you are a prostitute. You do appear that way with your unattractive ugly naked pictures. You appear to me as a celebrated nonentity.

I can write a longer letter but it will be a waste of time and energy. You may not fully grasp the meaning or may struggle to understand the language, the same way your boobs often struggle to stay inside your bra.

Take this as an advice. Apologise to Nigerians and take a new leaf. Become decent and influence the youths positively.
Do not bother to reply me. My girlfriend will feel ashamed that I even bothered to write you. Plus you will not like the backlash. Thank you

Why the media hype on this woman self?

Nigerian bloggers save your energy abeg she go soon retire.