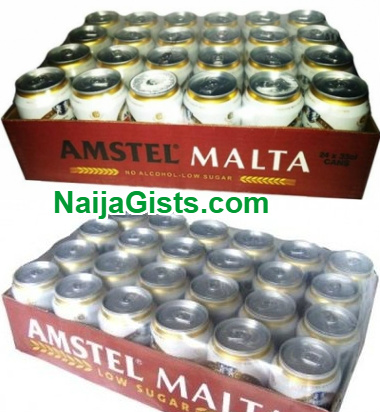 2 employees of the Nigerian Breweries plc, who allegedly stole 30 cartons of canned Amstel Malta, on Tuesday appeared before an Ebute Meta Chief Magistrates’ Court in Lagos.

The accused, Jacob Odion, 29, and Tobias Agidi, 43, are facing trial on charges of stealing and conspiracy.
They, however, pleaded not guilty to the charges.

The prosecutor, Insp. Moses Uademevbo said that they committed the offences on Aug. 25 at about 2.30 p.m. at the Canning Department of the company in Iganmu.
Uademevbo alleged that the accused stole 30 cartons of canned Amstel Malt valued at N69, 000.

The offences contravene Sections 285 and 409 of the Criminal Law of Lagos State, 2011.
Section 285 prescribes three years imprisonment, while 409 carries two years jail term if found guilty.
Chief Magistrate Helen Omisore, however, admitted the accused to a bail of N20,000, with one surety each in like sum.

She adjourned the case till Sept. 26 for hearing.