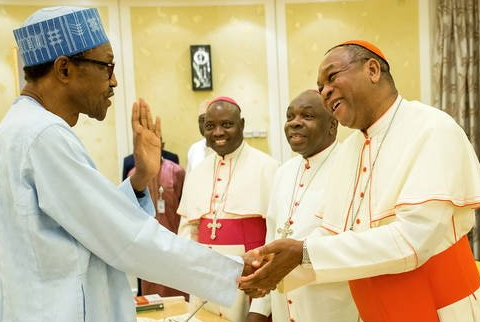 Feb 12, 2017 – Nigerian Christian Leaders As The Conscience Of Our Nation

The drama that unfolded recently in Ekiti State when agents of the Department of State Security, DSS attempted to arrest the senior pastor of the Omega Fire Ministry and how the story later transpired at the DSS headquarters in Abuja days after is still fresh in our memories.

And so the debate on the impropriety or otherwise of their action, whether or not it was politically motivated, or, as has been espoused in some absurd quarters, whether the preacher’s words were themselves civically inspired, can still rage on. Whether the pastor’s words were incisive of violence remains in the court of public opinion, which to me is for Nigerians to decide.

But, is it right for Apostle Johnson Suleman, or any preacher for that matter, to voice concern about the state of the nation if he or she felt there is some sort of injustice going on in the system?

There is not a shortage of people who believe and have argued that the place of preachers, especially Christian preachers should be the pulpit, case closed. Even though I agree that some so called preachers may not have demonstrated wisdom in the way they react to certain national issues and in choosing their words correctly, I ask, should Christian leaders keep mute in the face of injustice?

I believe one of the duties of our Christian leaders is for them to function as the conscience of our nation, pricking her anytime she goes awry. We have seen this happen many times in history and in many parts of the world. Only in Nigeria, where reason and logic gets turn in its head do we see something different. As a matter of fact, the evil and the quantity of innocent blood that has been spilt over the years in this country is such that, no man with a heart of flesh rather than steel, would watch from the sidelines without speaking up, least of all Christian preachers.

On June 2, 2016 for example, one Bridget Agbahime, a kitchen utensil vendor at Wambai market in Kano politely asked one Mr. Dauda to move his ritual Islamic cleaning from the front of her shop. For this, she was accused of blasphemy and summarily wasted. Her killers where later set free by the court as requested by the State’s Attorney-general.

In 2016, one madam Eunice Elisha Olawale, an early morning preacher said to be the wife of a Redeemed Christian Church of God pastor was slaughtered, and later found in the pool of her own blood in the early hours of the morning as she went preaching her message. Her killers were also freed by the police.

These two were women with families and their stories represented a very minute example of the number of people who have been wasted over the years for their religious convictions.

Can anyone today pretend not to notice that the Herdsmen who have been on rampage killing, maiming and raping in this country are armed with sophisticated weapons, profess a particular religion and none of note have been prosecuted since this killings started? Can anyone deny the age long reluctance of governments in northern Nigeria to grant lands to Christian churches to build? Or are we to mention the level of difficulty Christians face in joining the civil service, military, and so on in some part of the north? Like I experienced as a teenager in 1998 when I visited Adamawa State, isn’t the on-going discrimination against Christian names in the north, even in government and in regions dominated by Christians still a reality?

And would it be out of place for us to describe Boko Haram, the mother of all evils, as the extreme manifestation of many years of indoctrination and propaganda against people of certain faith?

Bishop Kukah in the lecture he delivered at the Cardinal Egan Centre in the USA in 2016 made the point that the persecution of Christians in Nigeria has been familiar, successive and characterized by violence with variations in level and scope, but that the essence remains the same.

Who can stomach all these and not speak up, preacher or not? As a matter of fact, every Christian preacher should begin to dedicate some percentage of the time they spend on the pulpit from henceforth, to speak up against evil and demand for justice all Nigerians. They should begin to speak to the hearts of our politicians so that they can begin to do their duty to Nigerians.

Our pastors live among us and so, if they want to see justice in our society, they must begin to move away from merely preaching Bible. And in doing this, they won’t be doing anything different from what the founders of their faith from time immemorial have done and are still doing. The civil society in the USA recognized this fact early, reason why the movement that fought for the liberation of the blacks from slavery was composed 90% of Christian leaders.

In the Holy Bible, the Synoptic gospels explain why John the Baptist, Jesus relative and forerunner was murdered. Herod who was tetrarch or sub-king of Galilee under the Roman empire, had had him imprisoned because he reproved him for divorcing Phasaelis, the daughter of King Aretas of Nabataea, his wife, and unlawfully taking Herodias, the wife of his brother Herod Philip I as wife. For this, the preacher’s name entered the king’s bad books and the rest is history.

We know that more than anything that came before or after it, the fall of the Berlin wall was the preeminent symbol of the collapse of communism in Eastern Europe and the end of the cold war. It was after these that the ‘captive’ nations of the fallen Soviet Empire became free and the Soviet Union itself peacefully dissolved. The point here is that, the late great Pope John Paul II, a Christian leader played a very major role in all that.

Even Jesus Christ, the founder of the Christian faith was constantly at war with the authorities of his day because he never ceased to speak out against their hypocrisy.

Speaking for truth, for justice and the voiceless has always been the tradition with Christian leaders from every corner of the globe and I don’t see why in Nigeria the situation should be different.

Why then should anyone tell us that the place of the Christian leaders should be the pulpit? As a matter of fact, any Christian leader who will not speak up against whatever anomaly he senses in the polity,  is not only disobeying the example of the founder of his religion, but he is also not living up to expectation as the voice of the lowly and the conscience of this nation.

In fact, every Nigerian with a conscience must now begin to stand up for our deeply held moral values of community, oneness, being our brother’s keeper, mercy and justice that we were known for in the 70s. Every Nigerian with a voice that can be heard like Apostle Suleman must now begin to call attention to injustice and the attacks, especially of the northern Christians.

It is time for the Nigerian government to form some type of national cohesion among the tribes and religions, realize that one of our major problems in this country is ignorance and illiteracy and as such stop putting politics before our welfare as citizens. Leaders at all levels must stop incisive utterances and state governments should stop portraying the image of themselves as favoring one religion or ethnic group over others.

Apart from the duty of government and the moral and spiritual urgency for stopping these killings, there are practical reasons as well. Reasons best summed in the words of Pastor Martin Niemöller during the dark days of Nazi Germany in the following lines:

First they came for the Socialists, and I did not speak out—
Because I was not a Socialist.

Then they came for the Jews, and I did not speak out—
Because I was not a Jew.

Then they came for me—and there was no one left to speak for me.

Whether we like it or not, we are all humans and Nigerians at the end of day. And our Politicians must be reminded that they will not remain in office forever. It could be the average anonymous northern Christian today, who knows, it could be anyone, politician or even the religious leader tomorrow…

About the author: Albert Afeso Akanbi is a Novelist, Researcher and Community worker. He lives in Abuja, FCT, Nigeria and he is a father. Twitter: @afeso82 , Instagram: afeso82  ,BBM Channel: C004489A2

Continue Reading
You may also like...
Related Topics:christian, Leaders, nigerian