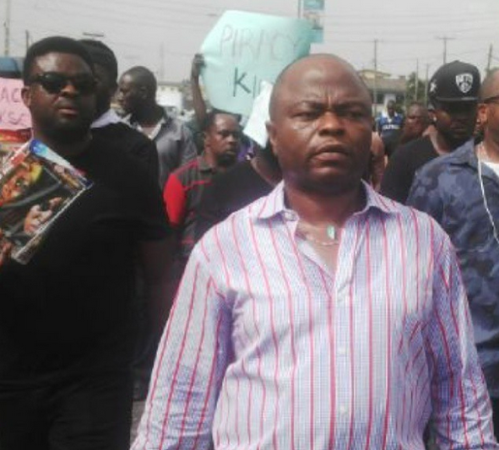 See excerpts from Kunle Afolayan latest interview with The Entertainer.

Can you tell us about the pirating of your latest film, October 1?

It all started a couple of weeks ago when my distributor, Gabosky and I were in South Africa. He had received a message from someone in Nigeria of a threat by some Alaba people that they had a copy of my film October 1 and that they will pirate and release it into the market. Immediately the message came, he showed me the text which stated that the people would release the film the following Monday. We panicked and started calling necessary people. When we got back to Lagos, we discovered that they did not carry out their threat as it relates to October 1, but they had flooded the streets with pirated copies of Phone Swap. Of course, Gabosky had already released the original of that (Phone Swap). We immediately informed the Nigerian Copyright Commission, NCC, our lawyers and the necessary security agencies about the threat and the release of Phone Swap. But it was not until this Monday morning (last week) that they carried out their threat concerning October 1.

How did you handle the initial shock when you got to know that the movie has been pirated?

It was a colleague who woke me up with a text message: ‘Kunle, have you released October 1 because copies of the film are already being sold in the traffic?’ I was shocked because that call from my colleague came as early as seven in the morning. Maybe things would have gone bad if not for the issues that happened on the social media two weeks ago where I had alerted the world of my experience with some boys, mostly from a particular tribe, who were hawking pirated copies of my movies. I called the attention of some important people and appealed to them to do something about it.

What exactly do you mean?

Of course, maybe that incident helped to keep my alive till today. You can imagine what would have happened if I didn’t have the information earlier about the pirates’ threats a couple of days before this incident and someone’s call suddenly wakes me to tell me my film, October 1 has been pirated. Maybe I would have died of high blood pressure. Despite that, since the news of the pirates got to me and I confirmed those boys are hawking my films in the Lagos traffic, I have become so disillusioned and highly demoralised. Sincerely, I could not step out of my office for a whole day. Even, as we speak, a company had invited me to come and pitch for a job today but I couldn’t go because I am not in a right frame of mind. I have been so sad and depressed since this thing happened.

What steps have the authorities taken so far?

I don’t know yet, but I did all the needful. I informed the government and necessary authorities immediately we heard of the threat, but the film was still released. You won’t believe that this is the second day and those boys are right there on the streets hawking my films brazenly In fact, they are so bold to the point of even threatening to beat up those who challenged them for hawking a film that is yet to be released by the owner of the work. It’s so frustrating.

Did you specifically point out this threat to NCC?

NCC? I believe they know those kingpins behind the nonsense. They know who the pirates are. You need to listen to Gabosky talk. The NCC officials have severally held meetings with Gabosky and these pirates to resolve issues. Can you imagine that NCC now negotiates with the pirates? A body that is supposed to be the police of the creative industry. That is what we are now facing and having to deal with. When you are even lucky to get them to act, they will give you excuses such as not having the resources and you now have to provide them with funds. Sometimes they will even complain of not having vehicles to carry out their operations. Gabosky has spent over N1 million on a particular raid before, and days after they have been confiscated, you will still see the films right on the streets again. Imagine. We can’t continue like this.

Do you think this could be a backlash of your tweets which some people twisted to be a xenophobic campaign?

It could be. Even without that last tweet saga, they could still have released the pirated work. But I want to believe that the quick release of the film could have been provoked by that social media saga. And on that issue, I just had to call a spade, a spade. Between all of these is my distributor who is Ibo and I trust him. He is deeply concerned. Gabosky told me that he knows those people who are neck deep in this piracy business. He said to me: ‘Kunle, I know the people doing this and they are my brothers…I am not saying 99 per cent of the Ibos are pirates, but that 99 per cent of those pirates are Ibos.’ That was what I re-echoed and if this is what will come out of saying that truth, it’s so sad. But we have to tell ourselves the gospel truth. We don’t have one film industry in Nigeria. There is no need looking at it from the perspective that I am saying all this because it has affected me now. I have been saying this way before now. I shouted when Half of A Yellow Sun was pirated. I was one of those on the raid, collecting pirated copies of Half of A Yellow Sun from those boys and we destroyed such copies. When AY’s 30 Days In Atlanta suffered the same fate, I was shouting that we do not know who the next victim would be. Today, it’s me, and some people are quiet. But tomorrow, someone could face a severe heart attack if nothing is done about this problem now.

Do you have any suspicions about the source through which the film got leaked into the pirates’ hands?

We are already conducting an investigation into it. I always discreetly watermarked copies of my films. The watermark on copies that go to the cinemas is different from those that will be with other levels of distribution platforms.

What about online platform since the film has been released on Netflix?

It didn’t leak from Netflix because it is not possible. But like I said we are already conducting an investigation into the source of this whole mess.

How much would you say this thing has cost you financially?

This film cost me about $2million (that was over N200million as at then). Recently, I announced that we have gotten a return of about N100million, which is still a far cry. So, how am I going to get the remaining balance not to talk of making profit? The only joy in all of these is the rave reviews, accolades and awards that this film, October 1 has garnered and is still getting. I would find solace in the fact that the film has gone beyond the shores of Nigeria and has already been tagged as one of the greatest films coming out of Africa. That is all we have to show for it now. So, imagine the money of the banks and also investors’ money that was sunk into all of these. Look at what happened to Half of A Yellow Sun? Do you think anybody will want to invest in film business here again? What even amazed me about all these is the magnitude of the piracy. I have never seen this type of thing before. You can’t imagine the amount of pirated copies of this October 1 released and distributed. It was so huge. The pirated copies were so well circulated across Lagos that you could say if only real distributors could deploy such energy and resources to marketing of our works, then filmmakers would be multi-millionaires. You can imagine having about 500 people simultaneously selling a particular pirated film on the streets of Lagos. That’s what the pirates have done to my film, October 1.

Will this not affect your next project which we learnt is also huge and already at the pre-production stage?

The truth is if the next thing to do will be to be going out of Nigeria for shooting, maybe I will consider that. Already, I have been getting such offers. Even with my new film project, The CEO, I was already getting offers from other parts of Africa from those who want to do co-production with me. And the funny part is that I have been telling these people; no, as I still want to shoot majorly in Nigeria. I took those decisions because I love this country so much. That’s why I have been putting all this energy and resources into doing all these projects here. But will one not begin to consider all these offers? Why should I insist on shooting majorly in Nigeria? Maybe the time is now to wake up to reality and go where I will not work and die young all because of patriotism.

So, you are seriously considering shooting outside the country?

Even though it is a sad situation I won’t let them break me. I won’t let them stop me from being creative. It is an experience and maybe I will only need to change my approach to the business side of filmmaking.

How best do you think this problem can be tackled?

Honestly, I am confused. Like I said I do not believe we have one film industry in Nigeria. Without a united industry, I doubt if we can honestly and collectively fight this cancerous problem. I think the onus still lies on the government to come to our aid right now. We have expended money in making the film, we have done our bit to make sure the film represents and promotes our culture within and outside Nigeria and Africa. This film October 1 represents this country. Everywhere this film travels to, it represents Nigeria. The film has become Nigeria’s pride as you know it is now on Netflix. This is unprecedented because there has never been an indie film on Netflix before. So, if this is what one gets for being a patriotic Nigerian, putting almost all of one’s life into making quality films, and also making sure that everything is balanced as all the major ethnic groups are well represented and portrayed, then it is unfortunate. If at the end of the day, you had such work pirated on a large scale like this, then I won’t blame all those who feel this country is not worth dying for.