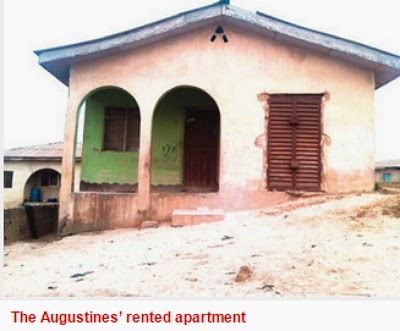 Ogun Police Command has arrested a gang of armed robbers, including a couple, who allegedly went to rob in an estate at Abule Lemode in the Ijoko area of the state.

They were reportedly arrested at about 9.30pm on Saturday, January 17.

We learnt that the suspects, who were in possession of a locally-made pistol, were first apprehended by the members of the local vigilance group before they were handed over to the Agbado Police Division, Ayinla, on Sunday.

Our correspondent gathered that it was the couple ─ Amache and Seun ─ who had stayed in the estate for about a year, that allegedly led the gang on the night of the incident.

They were said to have also connived with one of the security men in the estate.

When PUNCH Metro visited the area on Friday, one of the victims, Mr. Rasheed Akinwande, said the robbers stole cash and recharge cards from his house.

He added that he knew Amache as a bricklayer in the estate, but was surprised to know that the couple brought the robbers to attack the residents.

He said, “It was at about 9pm when they got to my apartment. They were two men and two women ─ Amache and his wife with another man and woman. But the couple did not come inside my house. Instead, two strange faces, who wore black jackets and jean, broke through my windows, and pointed a gun at me.

“They asked everyone to lie down, and they collected money ─ about N6,000 that they found in the house. They demanded more, and they even packed the recharge cards which my wife was selling. Few minutes later, we began to hear gunshots in the environment. The robbers fled. But the local vigilance group apprehended them eventually.”

The General Secretary of the estate’s community development association, Stephen Adesoji, said the executives prevented an angry mob from lynching the suspects on the night.

He said, “Two of the suspects were a husband and wife, and they live with us in the estate. They invited two others to perpetrate the crime. It was the security man they connived with who later alerted us that robbery was going on, and we informed the vigilance group.”

Our correspondent was shown the couple’s rented apartment. It was observed that the place was locked and dusty.

Amache, it was said, worked as a bricklayer, while the woman was a full time housewife, who took care of the union’s four children.

It was gathered that the suspects, in their statements to the police, had confessed to the crime.

He added that the suspects had been transferred to the State Criminal Investigations Department, Eleweran, Abeokuta.

He said, “The suspects are now at the SCID where further investigation is ongoing.”