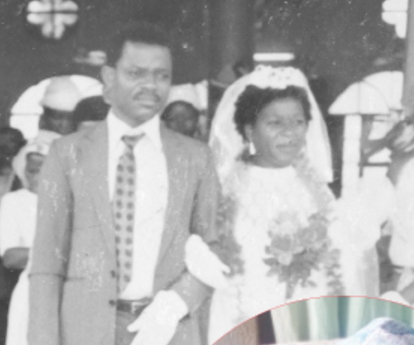 Mr James Anurunkem never thought he would end up with his wife, Loveline, a sister to his teenage best friend, in their hometown, Awo-Idemili in Orlu Local Government, Imo State. But on March 31st 1986, it was a reality and he is still basking in the euphoria.

In this interview with Lawrence Enyogahsu and Jennifer Ezeokoli, the couple narrated the gaiety and gloom of their 31-year-old bliss.

How did you meet her?

Husband: Our place was close. We had known each other for a long while. We never thought that we would get married. When I grew up, she was with her aunt, so when it was time I prayed over it, and I felt I should approach her for marriage, following my revelation. By then, I was already in Lagos, so I met her on the basis of the dream I believed that she was the one, nobody introduced her to me.

What was your position in life which made you feel you were ripe for marriage?

Husband: At that time I already started working. I worked with Customs and Military headquarters, Tinubu Square very close to Central Bank. I worked with them for three and half years then I left and joined Nigeria Airways. After some time with Nigeria Airways precisely in 1985, at that I felt age I was supposed to be married. I didn’t need to wait for all the money and wealth to get married. I was old enough.

Husband: I met a better version of her because when she was a child, I knew her. I was a friend of her senior brother who happened to be my age mate, we were classmates even before she was born, so I knew how she was doing then, but by the time I thought of her, I saw a new version of her which prompted me to conclude that she would be the one. 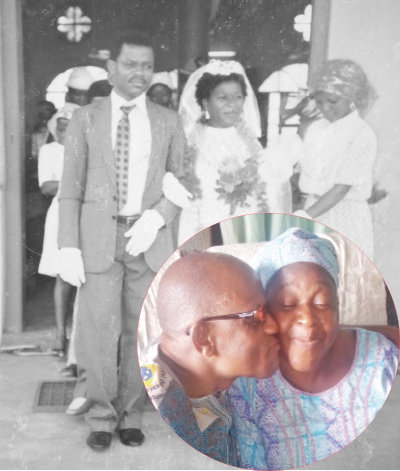 When he approached you, what exactly came to your mind?

Wife: Nothing really, I knew somebody owned me, so I had to consult my father. My father gave me approval. I went into prayer and God gave me His own version of conviction that his hand was in the marriage.

Did you just tell your father and he agreed?

Wife: No. When I said to my father, I meant God. My real and biological father was late at that time so I was with my mother.

So how did you tell your mother, as at that time children were more afraid of their parents than compared to now?

Wife: I was brought up in Lagos and I was mature at that time, so after praying and getting the conviction that God’s hand was in the matter, I called my mother and my step mother because the two of them brought us up. I told them what was happening and they agreed. They said they had no problem as long he was the one that wanted to marry me.

Why did they make such a statement? Does it mean that they already had pre knowledge of who he was?

Wife: Of course, they knew him well, they knew his family, and they said as far as it was James, then there was no problem.

Did you not think that with his exposure to Lagos life, his character could have changed over time?

Wife: Actually, I can say that I really knew his character when I was a child because I left the village when I was 10 years, but I got married on the basis that God approved it. Had it been that after all my prayers, I was not convinced, I wouldn’t have gone ahead with it.

What were those convincing signs?

Wife: It’s a testimony. When I prayed, God showed me a sign and after that, I was not satisfied with that one and He showed me another one.

Did you think your experience in life was rich enough for you to be a married man?

Husband: Yes, my mind was made up. Age wise, I was ready. The ability to accommodate as we were told when we were children that one of the ways to know someone that is mature to marry is the ability to tolerate, I knew as at that time, being the first child of my parents, I saw so many things; I suffered so many hardships, so I looked at myself and said at that age I didn’t think there was what a man can tolerate or suffer in keeping a family that I cannot.

When he asked for your hand, did you think you were ready for the marriage?

Wife: Yes! I was because I was of age. It was a general agreement though.

When you look back at that day what do you remember?

Husband: First, one significant thing was that the wedding did not stress me, because by then, I wouldn’t say that I was a poor man but I wasn’t rich either, and I believed in doing things according to my capability. I approached the Anglican Priest at my home church, who agreed that since both of us were from the same church and the lady I wanted to take was like his daughter and the children’s teacher in the church, that even if I didn’t have money for reception, he would wed us. He said we should come to church and he would wed us in a morning mass then we can go to Lagos even if it was on that day, that he would wed us and say all the necessary prayers. So the bottom-line is that the wedding wasn’t stressful to me neither did it cost more than I prepared for it. The weather too, was okay. The children of the church carried their musical instruments and were following the car that we were in so it was a peaceful event.

How did the first 5 years go?

Wife: The first three issues came in quick succession. A lot changed as, a third person comes in with its demands. It wasn’t so easy and you know government work and how they pay, and I wasn’t doing anything then as, immediately I got into the marriage I became pregnant.

Was he helping to carry the babies then?

Wife: A little but he wasn’t good in that area, there were other areas he thrives in but not babysitting especially a small baby like the first 3 months.

Didn’t that bring challenges between you?

Wife: To avoid issues, you should know what a person is good at, either that the person doesn’t want to do it or doesn’t know how to and you avoid complaint so as to allow peace to reign.

What are these areas that he is good at?

Wife: He is good at many things, like when the children were little and there were clothes to wash, he would help out because I would be busy with the children. From then till now he has been washing his clothes and he doesn’t give me any trouble concerning his food, whenever I give him food he eats. He hardly complains.

How would you describe your wife?

Husband: She is a God-given partner and helper. She is tolerant and has tolerated me right from day one. God empowered both of us to tolerate each other even till now because there are so many things that happened. It’s not all rosy but God gave us the ability to tolerate each other. Many families can not stand because of intolerance. We hear that couples physically fight, a man slapping his wife, or a wife would carry a chair and break the husband’s head, and we ask ourselves what would lead to a couple to go to that extent because we have not experienced it.

When was your hardest moment in this marriage?

Wife: It was when I was pregnant with my first daughter. We didn’t have enough money, and that was when we had just moved in here. I wasn’t doing anything, so it was so tough that sometimes I would have to wait for him to come back from work before I would give the first son food. Sometimes, I would go find things to feed him first before he comes back but I thank God because He made a name for himself. It was so tough that to eat three meals a day was difficult.

What has been your sweetest moment in the marriage?

Wife: When I look at my children today I am happy. By God’s grace my last child is doing National Youth Service Corps (NYSC) now. The older one would soon graduate, so when I look around I see God. These are my happiest moments.

Did you ever drag him to church because you were the church goer as the children’s teacher?

Wife: He goes to church too. He is a worker in the church.

What award did he win recently?

It seems he spends more time in church than in the house?

Wife: Since he is not working, he spends more time in the church.

So what time does he stay with the family?

Wife: When he comes back in the night he spends the whole night.

How do you settle disputes?

Husband: We settle it by sleeping over it. We have been told and we have seen people, families that fight and we go to separate them. Even in my absence they would call my wife to separate them, but we learnt our lessons early, when she sees me raising my voice, she would know that the enemy wants to come in. We try to sleep over it, you will have a change of mind, mellow down and be able to receive the message of peace. We noted it and whenever one of us is hot, the other person would suspect that the enemy wants to come in, so he would shut up not minding if it was the wife or husband because this is a lifelong contract, anything you do without calculation, you would suffer for it again. So we advised ourselves not to take rash decisions as it would lead to someone doing something that he would regret. This is a woman you saw as the best when you took her. We’ve heard of a husband who slapped his wife and the teeth fell off. When their children grow old how would they forget it?

What’s your advice for ladies who are about to go into marriage?

Wife: First, before they enter into marriage, they should seek the face of God. When God gives them go-ahead, then they should marry, and no matter the challenges they face they should have patience because there is time for everything, there would be a time when things would change but if you have a relationship with God then He would lead you. When you enter into marriage whatever condition you find yourself in, you should take it like that because the situation would get better as time goes on.