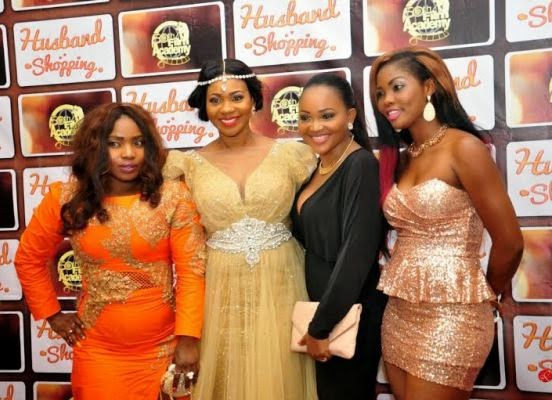 The title of this piece is a copyright from Aisha Falode and her team of co-presenters of “Amazons”, a magazine programme on African Independent Television. The phrase was the topic of the episode aired on Friday, August 28, 2015. I watched the fascinating edition and therefore decided to share my perspective on the issue with a wider audience. In the episode, Nigerian designer wives was the ascription given to married career ladies who are trendy, sophisticated, and cosmopolitan but deficient in culinary prowess. They are women who are well-read but lack the ability to manage the home front. They rely heavily on house-helps to clean and cook thereby outsourcing crucial matrimonial duties.

Ace actress, Funke Akindele, in one of the recent episodes of her highly entertaining TV drama entitled “Jennifer’s Diary” featured a character that best describe Aisha Falode’s Nigerian designer wife. The lady couldn’t cook nor do any household chore and only tried to do them when she was about losing her fiancé to another woman.

Is it not shocking that this country now has a sizable number of married women who cannot cook anything beyond noodle? There are even some of them who cannot boil water let alone egg. They have been so pampered that they do not know the way to the market and if they do, they don’t know the recipe for soup making; how to identify good fish or meat; which yam is good for pounded yam and which one is good for porridge; how to bargain, etcetera.

There are many ladies in today’s Nigeria that hire people to go to market for them. Thereafter, they go for their cookery book for guidance on how to go about preparing their meals. Some who couldn’t cook order large quantum of prepared food and soups from restaurants which they take home to refrigerate and microwave when they want to eat or entertain visitors. Some don’t even bother themselves going through all that stress, they simply eat out.

These designer wives do not know how to sweep, wash plates and clothes, mop the floor, dust the furniture, iron clothes, arrange the home and tidy up their environment. While some of them make heavy investment in purchasing washing machines for their laundry; some others hire people to do their home cleaning. Some do most of their laundry at the dry cleaners. All these are done at great financial and social costs.

What then do these designer wives know how to do? Oh, a lot! They are fashionistas and are specialist in the use of information and communications technology. They are connected to all the social media and can ping and chat from morning till evening except when they are busy at work. They regularly upload their latest pictures on their social media accounts such as Instagram, Facebook and Twitter. They also are good at watching the latest movies and films on satellite television. They have favourite soap operas they cannot afford to miss on terrestrial TV. They know all the major characters in Mexican soaps, Nollywood and Hollywood. They like to gossip and as such spend quality time on phones chatting up friends, colleagues and relations. They also love cars, customised, posh wonders-on-wheel, with which they cruise town.

Above all, they like to party. In order to outshine their peers and friends at social functions, they spend fortunes acquiring the latest designer dress, perfumes, jewelries, wristwatches, hats, headgears, sun-shades, cosmetics and so on. They are generally power dressers! They adorn themselves with artificial eyelashes and nails as well as padded brassiere (if they are not well endowed with mammary-gland).

They are the typical women who pay attention to their looks and spare no expense to look good. They are the ones who go for tummy tuck, breast enlargement and plastic surgeries just to look elegant. Some of the designer wives also spend time exercising and keeping fit. They diet a lot. Because they do not want their breast to sag, they often don’t spend more than a month breastfeeding their children. In short, designer wives want to be complimented as being sexy and gorgeous.

The sad thing is that these designer wives hardly have successful marriages. Though they may have elaborate, talk-of-the-town weddings, their marriages easily crumble like pack of cards as their husbands face the reality of marrying wives without proper home training. They often engage in shouting matches with their husbands as they bicker and nag over improper home management. Even where the husbands are accommodating and tolerant of their wives deficient domestic skills, their family and friends often kick over the mistreatment meted out to them when they visit. How can a wife who cannot cook offer her husband’s family or friends’ food when they come visiting? Well, except someone offers to do it on her behalf or she goes buying it. Some of these wives, who depend heavily on hired female house helps to assist with cooking and cleaning, have had their husbands snatched from them. After all, it is said that the way to a man’s heart is through his stomach.

The worst part of this sad saga is that women who do not know how to do house chores cannot impart such skills on their children and wards. Thus, we are gradually raising multiple generations of women who though are bookish and are accomplished professionals, lack good moral and cultural education to create happy homes. What a pity!

Incidentally, as there are designer wives, we have designer husbands. These are husbands, who love the good things of life, are trendy, classy, power dressers, cannot do a single house chore nor help out in child rearing and parenting. There is nothing wrong in a man being highly domesticated. Thanks to my mum. She thought me how to cook, wash and do all domestic chores. I recall that in those days, while growing up in the ancient city of Ibadan, mother insisted that we, all her children, should learn how to use the grinding stone to grind pepper for vegetable soup and porridge beans. I and my sisters took turns to do that. My home management skills came handy in my undergraduate and post graduate years as well as during my bachelorhood as I was able to do my house chores by myself including cooking my meals. There should therefore be no gender discrimination when it comes to domestic duties.

For the designer wives, especially those of them who wish to learn, the good news is that some women who saw the knowledge gap have decided to do something to help their fellow women. One of such is Mrs. Ope Tejuosho, who has set up a school in Lagos to educate women on home management, cooking, etiquette and so on. According to her, while featuring on the “Amazon”, some mothers and husbands have been enrolling their daughters and wives respectively in her school. Apart from catering schools, there are also television programmes where women and men alike can learn culinary skills. In closing, our parenting responsibility is incomplete if we do not give our children life skills in home management. All mothers and indeed fathers need to do something about this before their daughters get thrown out of their matrimonial homes.