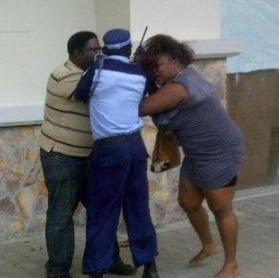 Monday Usifo, a 45-year-old man who allegedly beat up the wife for preparing his meal late was on Friday arraigned in an Ikeja Chief Magistrates’ Court.

The accused, an engineer, who lives at No.19, Emmanuel St., Ketu Alapere, a suburb of Lagos is being tried for assault.

The prosecutor, Sgt. Rapheal Donny, told the court that the offence was committed on April 17 at the accused residence.

Donny said that the accused alleged that his wife, Blessing, did not prepare his food on time, and resorted to beating her.

“The accused hatchet his wife with a cutlass on the head, which led her to bleeding profusely.
“If not for the intervention of the neighbours, who rushed the victim to the hospital, it would have been another story entirely,” he said.

The offence contravened Section 171 of the Criminal Law of Lagos State, 2011.
The accused, however, pleaded not guilty.

The Chief Magistrate, Mr Tajudeen Elias, granted the accused bail in the sum of N100,000 with one surety in like sum.

He adjourned the case till July 20 for hearing.