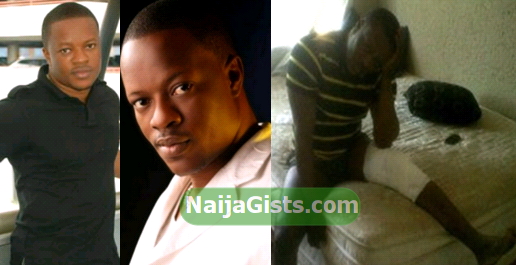 Dele Taiwo and Lanre Teriba performed together at West End Theater in Pretoria South Africa last Friday and the show was a huge success.

As the show rounds up, we learnt some attackers rushed into the G2 Entrance of the popular theater in Pretoria South Africa.

Gunshots were fired into the air to disperse the crowds.
The gospel singer who suffered serious gunshot wounds in the attack was also robbed of his Golden wrist watch, undisclosed amount of cash, IPad and Blackberry Porch.

He was shot in the leg by the suspected robbers.

Lanre Teriba was immediately rushed to an hospital in Pretoria for medical treatment. He has since been discharged.

A source who sent NaijaGists.com an email with the attached photo this afternoon said the singer is recovering well.

The above photo was taken on Monday during a courtesy visit to him.

So robbers too dey for South Africa? Na wa o

31 thoughts on “Lanre Teriba Atorise Attacked By Robbers In South Africa; Shot In The Leg”