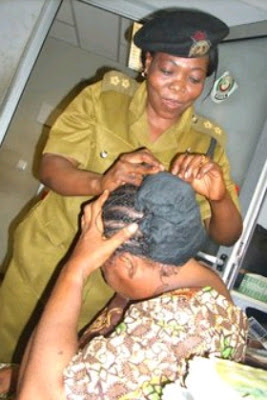 Giwa Ayoka Sikirat, a 53-year old grandmother, has been arrested with cocaine hidden in her hair, Nigeria’s anti-drug agency said on Monday.

Sikirat was apprehended at the Nnamdi Azikiwe International Airport, NAIA, Abuja, the Nigerian Capital, while on her way to Pakistan, the agency said.

The National Drug Law Enforcement Agency, NDLEA, said the suspect was arrested at the weekend following the discovery and seizure of a kilogramme of white powdery substance that tested positive for cocaine$

“The suspect, Giwa Ayoka Sikirat concealed the drug in her beautiful hair style while trying to board an Ethiopian airline Flight ET 910 to Pakistan enroute Addis Ababa and Dubai,” NDLEA said in a statement.

NDLEA Abuja Airport commander, Mr Hamisu Lawan, was quoted as saying: “There was no prior information on Sikirat as the drug was detected when a female officer carried out a body frisk on her during outward screening of passengers.”

Lawan said a 59-year old suspected accomplice, Joseph Umunna, an indigene of Anambra State, who brought Sikirat to the airport, was also arrested.

NDLEA said the drug was concealed in her hair in Lagos before she was taken to Abuja by her sponsors.

“Both suspects will soon be charged to court in line with the NDLEA Act for unlawful exportation and conspiracy to export 1kg of cocaine,” NDLEA.

She also attended School of Fashion and Design in Lagos in 1994. She hails from Kwara State.