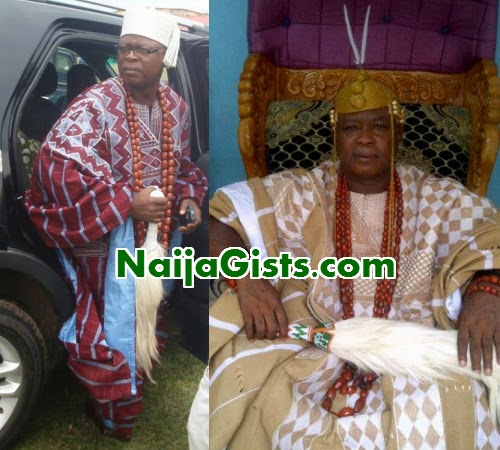 The royal father of Ijero Ekiti, HRM, Oba Adebayo Adewole recently blasts a Nigerian reporter for asking about his age.

At a recent annual programme for widows held by Pastor Matthew Ashimolowo in Osun State, the monarch was among the dignitaries who came in a convoy with his beautiful wife seated beside him.

See excerpts from the explosive interview below:

For how long have you been on the throne?

I ascended the throne 23 years ago, precisely December 1991.

How old were you when you ascended the throne? You are not supposed to know my age. My age is the age of my king­dom. It’s one of our taboos to dis­close our age.

Is your position hereditary?

Yes, it’s hereditary. Actually, we have three ruling houses and it was my grandfather who was on the throne from my own lineage. My grandfather was the Ajero from 1916 to 1930. So the other ruling houses have taken their turns and in 1990 the throne became vacant again. It now became the turn of my own lineage, the Arojojo Rul­ing House and from among 17 princes I was the one chosen.

What were you doing be­fore you became Oba?

I have a BSC in Mathematics. After my youths service, I joined the Ministry of Lands and Housing as a surveyor. I was trained at Fed­eral School of Survey, Oyo and in the Netherlands. I worked for about 15 years, before I was called to the throne.

How has life been for you as a traditional ruler?

As a traditional ruler, 24 hours, I am in the service of my people. You know, we live in the palace and the palace doors are never closed. People are free to come in anytime and leave.

So, as early as 5.am and as late as 10pm they still come and everyone that leaves their house to come to the palace expects to meet the oba seated. On a daily basis, we solve people’s problems. We resolve dis­putes and quarrels without charg­ing. If someone lodges a complaint against another, we call the other party and settle the dispute and then they go home happily and, of course, no adjournment , they come to the palace, the case is settled and they go home.

When you became oba, how did you feel at first?

Well, it was not just an an­nouncement like that, it was a pro­cess. The process even took about 16 months. Princes from the same ruling house who are qualified are selected. Seventeen of us were cho­sen to start the race and there were consultations with the oracles, there were consultations with the elite of the town, then when the family chooses candidates, they present to kingmakers. Kingmakers do their own jobs, consulting the oracles and dialogue with the indigenes of the town, home and abroad and then they forward their findings to the government.

Government considers the candi­dates and many other things before they finally pick a suitable person.

Sir, don’t you feel bad living in the village as oba, having lived abroad for many years?

At the initial stage, I quarreled with my dad for submitting my name for consideration. He said he had to because I am a Prince and everyone knows. But when the process was going on, I now knew what I was going in for. By the time they finally chose me, I was ready. I didn’t feel bad after all.

How do you cope with liv­ing in the village?

My domain is no longer a vil­lage. As a matter of fact, after Ado- Ekiti the state capital, it is my do­main that’s next and my kingdom is by far the largest in Ekiti State. I have 24 towns and villages in my domain. I have 24 obas under me. So, it’s not a village as such. Life is okay, life is comfortable, in my place. We have pipe borne water and electricity. All telephone net­works operate in my domain.

Did you have to shelve any of your ambitions?

Yes. As a young man, I knew I am a prince and it was going to be the turn of my ruling house to rule but I never thought it could be me. So, I had my own plans.Like I said, I was a surveyor in the Ministry. I had already realized part of my am­bition, because I became a licensed and charted surveyor. I was hoping after I leave government job I will go into my own private practice. I was also a United Nations vol­unteer, and I was to travel for that program when the issue of succes­sion came up. I already got my let­ter and was posted to the Caribbean Island. I had to settle down and ascend the throne, because even if I was abroad they would have re­called me.

I wake up and say my prayers before I come to the palace. Like I said, immediately I come out, my people are already there waiting for me and they come with whatever they come with and I try to settle for them. At about 9.am, some of my chiefs join me everyday. When I am not in the palace they are al­ways there. At about 12 noon, we have a recess and by 4pm we are back waiting for the people and at­tending to their different needs. We close at 6.30pm.

What has life taught you?

Life normally teaches us to be really patient and to persevere. You have to have a lot of patience to be able to serve people, especially the aged ones and the less privileged. It has taught me to listen.

You have to listen and talk to them carefully. Life has taught us to be generous as many people come around for assistance and as they come, you have to help them one way or the other. The joy of it is when you help somebody and the person leaves your presence happy, then you feel fulfilled. That is the joy of serving the people.

You have a beautiful wife beside you, how did you meet her?

That’s not a question for an oba.

In terms of development, can we talk about the chal­lenges you face in your area?

That’s one of the major duties of a traditional ruler. While you are performing your traditional duties, you must also be at the forefront of bringing development to your people. It’s my duty to coordinate my people at home and abroad so that we can do something to im­prove our environment and our community. We have to liaise with government at state and federal levels to attract development to our community.

That’s the way it’s done and that’s part of our primary duties here. The issue that is uppermost in the minds of my people right now is for us to have a higher institution of learning like a university or a poly­technic. Also, we need big firms that can employ our teeming youths who are graduating everyday.

What’s your perception about this event?

The pastor is doing a good thing. He is doing a lot to alleviate the problems of the widows. Gov­ernments too are making some ef­forts but as you can see, a lot still needs to be done. Philanthropists still need to help the widows more. They face lots of hardship taking care of themselves and their chil­dren and some of them have chil­dren in higher institutions of learn­ing. It’s not easy to feed and clothe these children.

This is a great occasion and we commend Pastor Ashimolowo for this annual program of giving clothes, money and food to widows all over the place. I’m sure it’s an annual expectation of the widows to come forward and receive these gifts. It’s a great occasion and be­cause of its intentions we all came to celebrate it with the pastor. I come here every year. This is about my sixth time of coming. Pastor Ashimolowo is a good friend and this is a great occasion, first Satur­day of every year, and it’s already programmed in my calendar for the year, so that we can always join him.

What do you think about the plight of widows in your domain?

It’s a very serious thing now. You can see how the women queue up at this event. We know that in our nation, there is poverty. In spite of government efforts, poverty is very much around and the government needs to do more. A lot of widows are out there suffering after the demise of their husbands and as a traditional ruler, we know what widows go through and it’s a very laudable thing the pastor is doing. Governments too are making ef­forts but as we can see, it’s not suf­ficient. A lot still needs to be done.