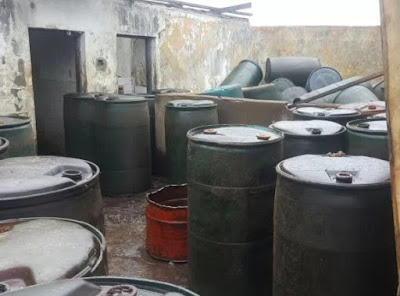 On arrival at the site, they found several storage compartments with petroleum products suspected to be Automated Gas Oil (AGO) popularly known as diesel.

The diesel was stored in more than 20 compartments and large polythene bags, and each compartment had about 100 storage drums, each containing 350 litres of illegally refined diesel. “The drums and polythene bags contained an estimate of about one million litres of stolen diesel.

5 men operating the illegal warehouse were arrested while 15 others fled the scene.