Do you remember the sad news of a Nigerian Pharmacist , Olutosin Oyelowo who committed suicide by jumping-off a bridge on the 9th of December, 2011. naijagists.com

Tosin Oyelowo body was discovered on Wednesday December 21st, 2011 afternoon on Sullivan’s Island almost 6 miles from the bridge where she was speculated to have jumped into on December 9th, 2011. 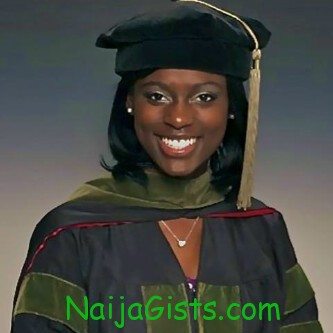 According to Post and Courier, Tosin’s body was spotted on a sandbar by a young resident of the island who came home on Christmas break. The father of the boy said his son notified him of the discovery, but told him he wasn’t sure if it was a person. Earl Bridges said he waded out to within three-feet of the dead woman. She was face down, wearing a red shirt and jeans.

Charleston Police identified the bridge jumper as Tosin Oyelowo, 25. She was a first-year pharmacy resident at the Medical University of South Carolina and a native of Lagos, Nigeria.

May the Lord comfort the grieving family !