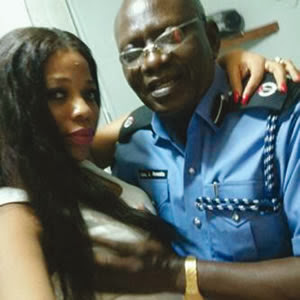 You must have come across this very controversial picture of a Nigerian Police officer, ACP who grabbed a lady’s breast going viral online.

The photo has reached the desk of the Nigeria Police Force and the senior officer in question has been queried.

After a series of investigation, NPF concluded that the photo is fake.

NPF claims it was fabricated using Adobe Photoshop in order to mislead the public.

On their official Facebook page, the Assistant Commissioner of Police in question was quoted saying, “I don’t know this lady. I never took the picture with her.”However, the authorities did not name the police officer nor give the details of the command where he is serving.

Days after the picture appeared online, it has provoked outrage and intense condemnation from many Nigerians who are clueless about the whole thing.

Claiming to be policemen, some people wrote on the police Facebook page that the picture was the handiwork of mischief makers, who were clearly determined to drag the name of the security agency in mud.

They said that no uniformed officer of the rank of ACP would  be so careless as to pose for a photograph in such a compromising position with a lady.One Oluwasegun Samuel-Alalade commented on the wall of the Facebook page. “I know it is not real. Even a fresh recruit undergoing training at the Police College will not do such a thing, not to mention a top ranking officer. The Nigeria Police Force should kindly disregard the photograph, “ he wrote.

Also Kabiesy Ojeabulu wrote, “Photoshop or no Photoshop, all I have to say is that the Inspector General of Police, Mohammed Abubakar, should always investigate issues before taking actions. It appears that a large section of the general public does not like the police. So they fabricate anything to tarnish our image. God help us all.”

But this photo looks real to me and that lady resembles a very popular Nollywood actress who recently dumped her lover.

Over to you guys, take a closer look at the above photo, is it real or fake?