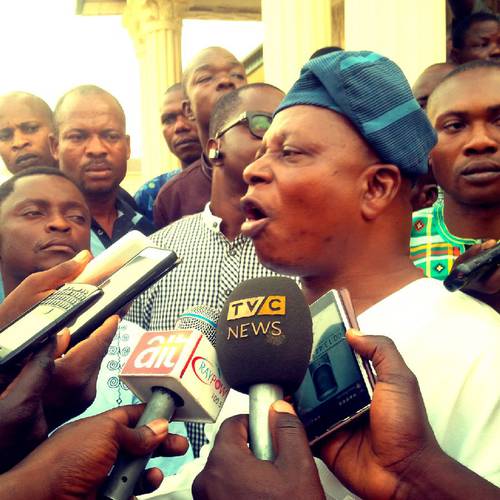 Ex-Ondo State House of Assembly Speaker Victor Olabimtan, who spent 3 days with his abductors, yesterday said he was forced to trek barefooted in the bush by his abductors.

Reliving his experience to reporters at his home in Akure, the Ondo State capital, the All Progressives Congress (APC) aspirant said he and other victims were put inside a pit, where they spent the night.

Olabimtan was abducted last Sunday at Kwali on his way to Abuja, the Federal Capital Territory (FCT).

The APC chieftain confirmed that ransom was paid, but he didn’t give the exact amount.

The victim, who was received by his supporters, amid jubilation, said: “It was exactly 6:35pm on January 10, when we got to a spot at Kwali and I heard loud gunshots. I asked my driver what was happening.

“When I saw the shooters, they were in army and police uniforms and I thought it was the police and the army exchanging fire.

“It was later that we discovered that they were robbers.

“They stopped so many vehicles and blocked the road. Then they started searching the vehicles.

“When they got to my vehicle, they asked for what I had and I gave them what was on me- very little money. I gave it to them and they left. They said we should lie down and I laid down.

“In the twinkle of an eye, some of them came and said where is Oga? Where is Oga? They saw me lying down beside the car and said ‘na you be the owner of this car’ and I said ‘yes’.

“The abductors told me to get up. They held me by the waist and started dragging me into the bush.

“When I tried to resist, they slapped me and I had no choice but to obey them.

“We had walked for about 30 minutes when they asked me to stop. One of my captors said I should stand up and walk into the bush. I refused. I said ‘no’.

“He had a cutlass in his hands and he used the blunt side to beat me on the back, but I still refused to move. One of them came and said ‘leave him, leave him, don’t bother, leave him’.

“They said I should sit down and I sat down for about 30 minutes. We continued our journey. I was walking bare footed because my shoes had been removed.

“Some of the abductors were in front leading us; others were behind following us and by 11:30pm, we arrived at a spot.

“When we got to that spot, they said we should all lay face down and we obeyed. It was at this point that they shared the stolen money.

“When they finished, the abductors told us that is where we would sleep and we were there till the following morning.

“By 4am, they said we should be on the move and we started another journey till 11:30 am.

“Later, one of them came up to me and asked ‘How much do you have?’ I said ‘I don’t have money’. He asked again ‘How much is in your bank account?’

“I said there was no money in my account. He said okay ‘Who do you know that can give you money to bail you?’

“Then I asked how can mine be N20million and they said ‘Na you be oga now, you no see yourself , you no see the car wey we take you from, na you be Oga, say who you be sef.’

“I said okay, I have people I can call; let me call my son. They gave me my phone and what I did was I tried to send a text message to my son.

“They took the phone from me and said we asked you to call your son and you are sending text message. ‘You will die today.’

“After some time, they came back to ask for a number, which I gave them.

“One of them will put a dagger on my neck to frighten me. I pleaded with my family to raise the funds.

“The only food they gave us was bread but I didn’t eat because I was fasting.

“There was no water and I requested for Coke, which they brought the following day. I drank it.

“We walked from 7pm till around 1am. We stopped on a mountain from where you can see the whole of Kwali and Gwadalagda. They said this is where we were going to stay ‘till you are bailed’.

“By 4pm on Wednesday came the cheering news that the ransom had been paid.”