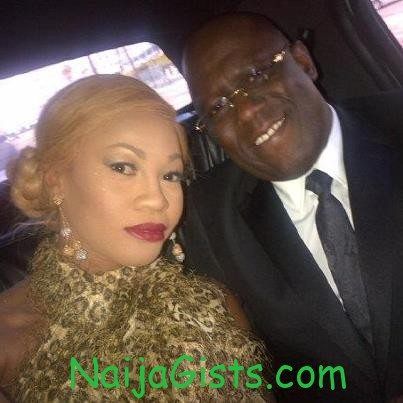 The death of Nigerian singer Goldie Harvey has been confirmed by her music management company Kennis music and her boss, Kenny Ogungbe.

According to Kenny Ogungbe who arrived Nigeria with the now late Goldie Harvey, she collapsed after she complained of severe headache, a form of migraine at exactly 7:30pm on Thursday night in the hand of her best friend, model Denrele Edun.

She was rushed to the hospital but she was later certified dead by the doctors.

People that followed her to the hospital claim the doctors were crying when they saw the lifeless body of singer Goldie. They said there is nothing they could do to revive her since she had already died.

Goldie Harvey’s corpse has been transferred to a local mortuary in Lagos.

“With a deep sense of loss, we announce the shocking death of our
darling music star, Goldie Harvey. Goldie, 31, died on Thursday after
she complained of a severe headache shortly after her arrival from the
United States where she went to witness the Grammy Award. She was rushed from her Park View, Ikoyi, Lagos residence to her official hospital,
Reddington, Victoria Island, Lagos, where doctors pronounced her dead on
arrival at exactly 7:30pm in the evening.

We consider this period a gloomy moment for us and the entire Nigerian music industry in view of the circumstance in which she passed away; the abundance of talent she exhibited in her short but eventful music career and the various opportunities her trip to the United States of America would have availed her. She is survived by her father, step- mother, brothers and sisters. We deeply sympathise with her family and fans all over the world and very grateful to all and sundry, especially, the vibrant Nigerian media for their concern and prompt reportage. We shall keep everybody informed as events unfold as we are devastated by the sudden loss.”

NaijaGists.com was on top of the situation last night. Our sources in Lagos furnished us with all the details we shared in our previous updates.

Another source whom we spoke to this morning said the beautiful lady might have died of drug overdose. We are also hearing controversial report that Goldie Harvey was killed by spiritual forces.

We will get you more information as they are made available.

All the same, may the Lord accept her soul.