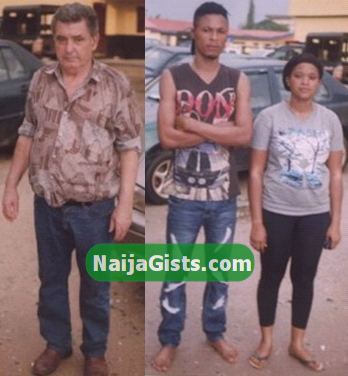 The victim’s lover, Okafor Ada Joy, 28, who along with one Kenny Oyemwina, 25, lured him from Spain, took him (Spanish) hostage and made him to part with all the money he had.

According to the Edo State Commissioner of Police, Mr. Folusho Adebanjo, who briefed journalists yesterday on successes recorded by his command in the fight against crime, “investigation revealed that the female suspect is the Spaniard lover who lured him from Spain to Nigeria and he was made to withdraw all the money he had in his domiciliary account.

“When the two suspects discovered that their victim had no money on him and in his account again, they forcefully asked him to call his sister in Spain to send 2000 Euros to them before he could be allowed to go back to Spain.” Adebanjo said the two suspects had been arrested and would soon be prosecuted.

The victim told police that she knew Osahon through facebook. The two suspects, who were said have made confessional statements would soon be charged to court, according to the Edo State Police Command boss.

The commissioner, who sued for good working collaboration with newsmen, called on members of the public to always give useful information to the police.

12 thoughts on “Nigerian Woman Kidnapped Spanish Lover She Met On Facebook; Lured Him From Spain & Held Him Hostage”