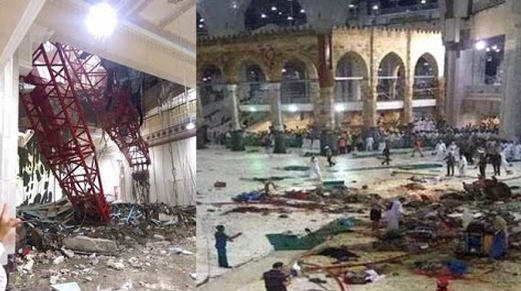 37-year-old Shafiu Yusuf Baban Ya’u from Kaduna while describing his ordeal during last Friday’s tragic crane collapse at the Grand Mosque in Mecca, said he witnessed many deaths.

One of the people who died is an Arab man, who just before the tragedy, hugged him for allowing him a prayer space behind.

“Three minutes after he sat behind me, thunder struck and a hurtling stone hit me on the fore head. I looked back and saw that the same man who hugged me in bloody pieces.”

Baban Ya’u said his fellow supplicant’s death was devastating. “I could not sleep for days and my blood pressure went up, that I had to be hospitalised,” he said. “I pray that Allah grants them paradise,” Baban Ya’u said.

Another Nigerian injured during the tragedy, Shehu Ibrahim Hunkuyi, from Kauru LGA of Kaduna State, said when the rain started getting heavy, they moved under a shelter close to the collapsed crane when they heard the first and second thunderclap.

“The second one heralded the collapse and I could clearly see the heavy-chained crane hook swing into the Ka’aba arena, sweeping many unsuspecting worshipers to their deaths within seconds. Many died,” he said.

Ibrahim added: “In fact, I escaped death by whiskers because the man who died from Kaduna State was in the same shelter with me. Unfortunately, we ran to opposite directions when we heard the first thunderclap.

I only sustained minor injuries on my chest and thigh from a large chunk of concrete that hit me.”

Over 107 Hajj pilgrims died when a crane collapsed at the Grand Mosque in Mecca last week.