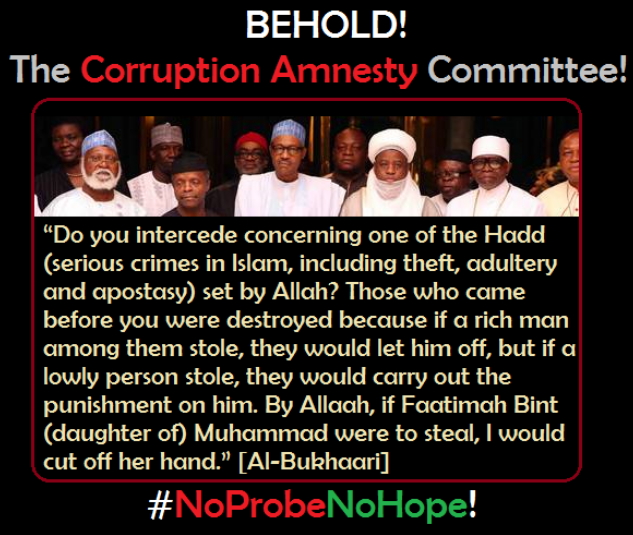 The #NigeriansMarchAgainstCorruption hashtag has been trending Today, Thursday according to Trendsmap, as Nigerians gear for protests in support of the government’s war against corruption. The vociferous Aisha Yesufu of Bring Back Our Girls Abuja family tweeted,”Dear Nigerians, They are uniting to protect their interest. When wld we unite to protect our own interest.” and, “Dear Nigerians, President Buhari is an orphan in this war against corruption. We need to adopt him… #NigeriansMarchAgainstCorruption.” The tweets immediately resonated and went viral.

Prompted by the Abdulsalami “Peace” Committee initiative to allegedly interfere with the new Government’s decision to go hard on corruption and the corrupt, Nigerians across the divides have decided to rally for the government and demonstrate their full support for the full probe and recovery of looted billions of dollars from the past administrations. At least $150 billion has been carted out of the country in the past 10 years. The same figure has also been stashed in properties, cabal industry and land acquisition in the country. These figures point to a staggering average of $30-40 billion looted annually. 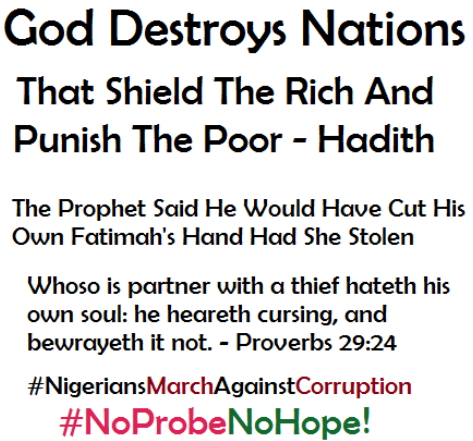 Olusegun Ogundipe said, “Fellow Nigerians, we should not assume the battle is over once PMB became the president. The battle has just begun, now that we are trying to recover our stolen yams from the estranged goats. The people of Nigeria must rise up this one time to confront the miserable elites who are bent on sucking this nation to death. No one should take the ranting and drunken gyration of the atavistic Kukah for granted. He represents evil men who worship in the Temple of fraud and deceits. When it comes to self preservation, Nigerian looting elite are deadly, dangerous and merciless. Nothing is sacred and beyond their capacity to do. Nigerians voted for CHANGE ! The old order must bow to CHANGE!”

Similar cries have been broadcast across the digital sphere. No one could tackle corruption like Buhari. This is becoming most evident. As also is the fact that he cannot do it without the loud support and solidarity of the suffering masses. The cabal, elite, politicians and senators are lurking and attempting at every turn to way lay the anti-corruption drive. Bishop Kukah said on Channels Tv that they wanted Buhari to “govern,” and that former president Jonathan whose administration is the focus of the probes should be appreciated for handing over power constitutionally and not organizing terror on the nation in refusal. The presumption of the “Peace” committee was that by allegedly focusing on recovering looted billions and resurrecting Nigeria from the deadly claws of corruption, Buhari had wasted the mere two months he had been in power. Buhari has refused to be deterred. It was reported that he shrugged off the corruption amnesty lobby politely and when they attempted to solicit on behalf of embattled and investigated Senate president, he told them off too, politely.

Similarly, the Senate has doubled down on its jumbo income. Nigeria’s Senate, the highest paid in the world covets between N120-150 billion, about 1 billion USD/annum. While Nigerians have been protesting for the National Assembly budget to be cut to less than half of what it currently is, the Senate this week as expected rejected a 10% cut in their wages.

Starting Monday Nigerians will gather at Unity Fountain Abuja, CMS bus stop Lagos and other protest centers across the nation and Nigerian embassies across the world to protest in solidarity with the Buhari/Osinbajo integrity government and against the obstructive Elite, the “Peace” committee and jumbo wage earning National Assembly. Kaduna are marching Wednesday 21st at 9am, Murtala sq. Other centers and dates are being announced on the hashtag. The masses are determined to end all corruption before corruption ends it for Nigeria.

Mr. Jag @jag_bros said, “I walked on d road with Megaphone to campaign for Buhari specifically for dis.. PROBE THEM ALL ….. #NigeriansMarchAgainstCorruption.”

The masses war for CHANGE is apparently not over just yet.