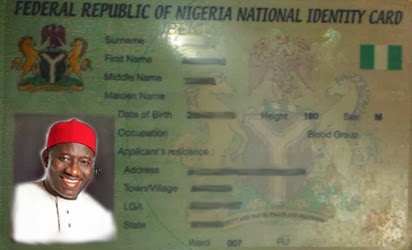 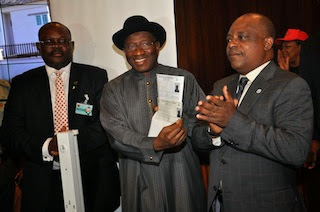 Jonathan gave the directive during a ceremony at the Presidential Villa, Abuja, where he also launched the National Identification Number (NIN), expressing displeasure at the proliferation of data capturing activities by private and public institutions in the country.

“Aside from being unwieldy, the cost of operating multiple discordant data bases and infrastructure is unsustainable.

“Government cannot afford continued proliferation of data capture activities. Proliferation does not grant any advantage in efficiency neither does it make good economic sense. The growing identity verification needs, therefore, calls for harmonization and integration of identity data bases in the development of a universal service infrastructure.

According to the President, all government agencies requiring identity verification and authentication services or involved in data capture activities should align their activities with a view to switching over to NIMC infrastructure.

He said: “The Secretary to the Government of the Federation and the Federal Ministry of Finance must ensure that these objectives, which are aimed at streamlining biometrically-linked databases and optimising scarce resources, are accomplished in record time.“

He expressed the hope that by the time the projects were completed, they would assist the National Population Commission (NPC) in carrying out the 2016 census.

He stated that in spite of their separate obligations, NIMC and NPC needed to work more closely to deliver a comprehensive centralised national database urgently.

Jonathan also urged the private sector to partner with NIMC in ensuring an efficient national database for the country.

“While Government remains committed to the accelerated development of the National Identity Management System (NIMS), the private sector must also rise up to its role.

“Corporate operators must seize the unique opportunities provided by the Concession Agreement to make investments in the scheme.

“Private sector participation would mean extended optimization of resources typically devoted to addressing issues of Proof of Identity across the nation.

“It would also mean seamless integration and use of a common facility for identity verification and authentication in both the public and private sectors,“ the President said.

In his remark, the Director-General of NIMC, Mr Chris Onyemena, expressed the hope that the identity card project would collapse other data capturing activities earlier embarked upon by some institutions in the country.

He said the project remained the most important tool for the harmonisation and integration of government policies and programmes.

Onyemena added that NIMC would partner with the National Orientation Agency (NOA) to educate Nigerians, especially rural dwellers, on the need for them to obtain their national identification numbers. [News Agency Report]