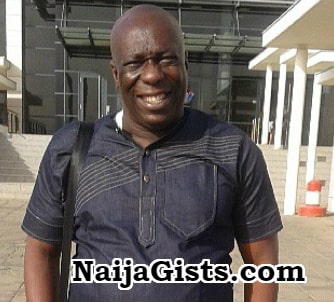 In a recent chat with Saturday Beats, the actor noted that entertainers who bleached their skin to attract roles were just being stupid.

According to him, there is role for every skin colour in the industry.

“I have never loved bleaching; why would people destroy their skin because they want to be like the white man? The white man has never tried to darken his skin to be like us, people who bleach look disastrous and disgusting; it is a sign of inferiority complex. When they have accidents, it becomes worse for them because it is not easy to treat bleached skin.

“Dark people look homely to me; those who bleach are cheap. I have never dated any lady that bleached, I like natural beauty. As a young man, even though I came across ladies that bleached, I never considered them for a serious relationship. I just got what I wanted from them. I like dark people naturally, that is why I married a dark woman.

“Everybody has a role in Nollywood, it is a natural world. Anyone who bleaches their skin to get movie roles is just being stupid. There are very successful actors who are dark-skinned in the industry. I think it is all about contentment because even some people, who are naturally light-skinned, still bleach.” he told Saturday Beats.

Speaking about his journey into the movie industry, he said at the initial stage, he wanted to be a comic actor but he was not given the opportunity he needed because people thought his face was not friendly.

“When I started my career as an actor, I was interested in comedy but they told me my face was too stern. Eventually, I got into comedy by force. I never wanted to stick to comedy; my aim was to be a versatile actor,” he said.

Also, ahead of the upcoming 2019 elections, the actor urged Nigerians to have the best interest of the country at heart as they exercise their civic duty.

“Nigerians should have the country’s interest at heart in all that they do towards the upcoming elections. If we all put our heads together to make sure things go right in the country, Nigeria will be better.

For example, the state of the economy does not favour the movie industry at the moment; the entertainment industry is going down.

We pray that the government would realise that the industry has the potential to generate revenue for the country.

We are not telling them to give us money to produce movies; all we want for them is an enabling and convenient environment for us to make quality films” he told Saturday Beats.