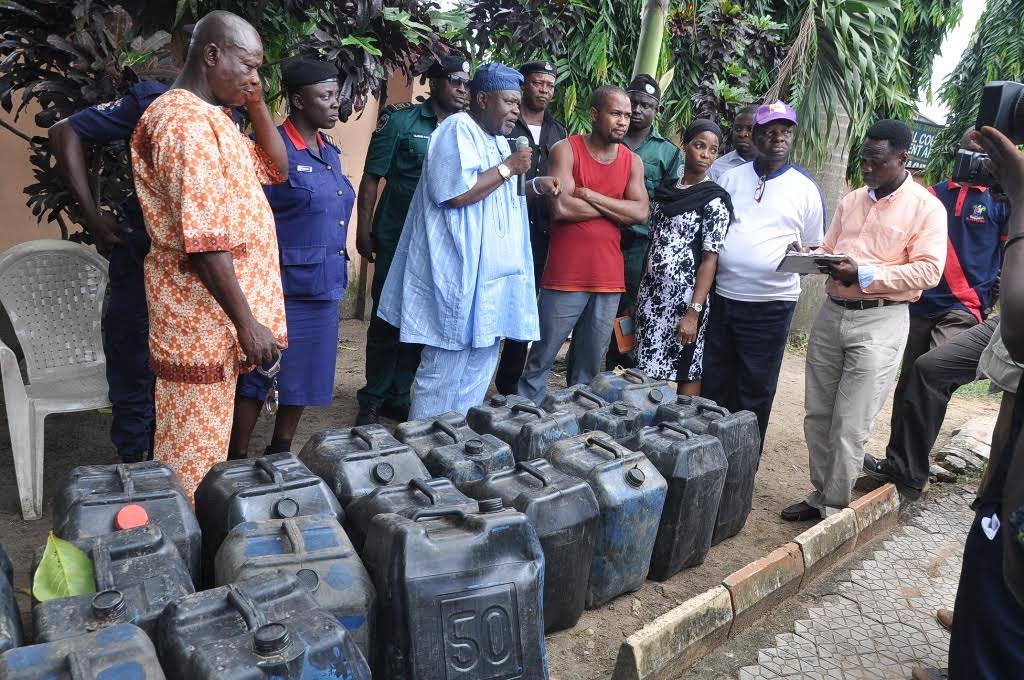 The police in Lagos have arrested a suspected fuel thief Olalowo Agboola who converted a room apartment for selling petroleum products.

Agboola was nabbed on Wednesday by officers of the Rapid Response Squad (RRS) at his 24 Awoseyin Street, Somolu, Lagos residence, following a tip off.

RRS Commander Olatunji Disu, an Assistant Commissioner for Police (ACP), said his men led by Olabode Aroge, a Superintendent of Police (SP), disguised as prospective buyers before getting him.

The suspect was about selling the fuel for them when other policemen in uniform stormed the house, he said.

Disu vowed to arrest Adeola who Agboola claimed is the owner.

According to him, the suspects were in the habit of selling fuel to members of public inside face-me and face you building.

Agboola said he was just recruited into the job a month ago.

He said: “I was a commercial bus driver before I was initiated into this fuel theft occupation. I only collect commission of N200 on each keg I was able to sell in a day. I know I was doing an illegal job but because there is no job and I have no choice than to join them to earn livelihood.

“Adeola is the one who employed me to be his assistant. While he goes out to bring petroleum products, I will stay home to sell. I know he will be on the run because someone might have hinted him that I have been arrested”.

Disu said Lagos will not tolerate any act of criminality and illegal occupations.

The commander said if the policemen have not acted swiftly and the house caught fire, it could consume the whole community following the high number of petrol and diesel found in the house.

He urged Lagosians to report any form of illegal act in their neighbourhoods.

“This will enhance efficiency of the police when adequate information is passed to us. We implore public to always give us useful and timely information,” he said.

Meanwhile, the state command yesterday warned residents and motorists to be careful in handling petroleum products and desist from storing them at homes.

Its spokesperson, Patricia Amadin, a Deputy Superintendent of Police (DSP) said the warning is coming against the backdrop of high rate of fire incidents in the state.

Amadin said: “These incidents are arising from carelessness and mishandling of petroleum products through black racketeering and mass storage in homes. On Wednesday, a motorcycle conveying a woman with a gallon of petrol stacked in a polythene bag collided with another in Mile 12. In the process, the spilled content caught fire, which engulfed both motorcycles and four others close by.

“The rider, the passenger and two others suffered severe burns and have been admitted at a nearby hospital for treatment.’’