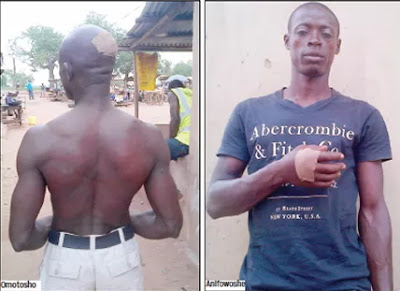 Cultists have attacked and injured a 42-year-old man, Adewale Omotosho, a member of the Oodua Peoples Congress (OPC), at Shimawa, Ogun State. Omotosho was accused of sleeping with the stepmother of some members of the cult group known as Golden Star.

It was gathered that about 10 suspected members of the group, led by the stepchildren of the woman, attacked the victim on Monday with dangerous weapons. Omotosho said he and his wife went to a friend’s house in the community when he was attacked.

He said: “We were still waiting for the person we went to see, when the woman I was accused of sleeping with came without greeting me. I even joked with her when she did not greet me because she is the wife of a popular chief in the community.

“After I asked her why she did not greet me, she left. Immediately after that, I saw about 10 young boys, who are cult members in the community. They pounced on me and beat me to stupor. They attacked me with machete and I sustained injuries. My wife was not also spared from the attack. “I was still writhing in pain when some residents, who know me as a member of OPC, rushed to call my colleagues who came and took me to the health centre where I was treated.”

Omotosho said the matter was reported at Ogijo Police Division, while some members of OPC were said to have sustained injuries when they tried to rescue their colleague from the cult members.