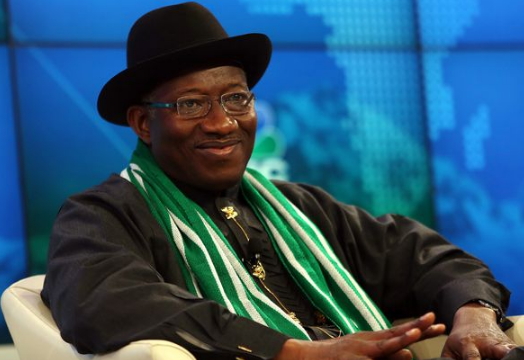 All the recent corruption news headlines against Jonathan and his wife is a mere ploy and tactic of APC to showcase their crusade,hate,propaganda in an effort to divert the attention of Nigerians from their ineptitude,incompetency,lack of good economy policy and capability to move the nation forward.

Nothing! virtually nothing has being achieved by Buhari-led government other than undiminished announcement and publicity of how Goodluck Jonathan have embezzled public funds.

That is the news they often want the Nigerians to read and that is what will continue to make headline until 2019 of non achievement,no fixing of economy,severe hardship,lack of employment,high inflation and total collapse of our economy.

Nigerians are sick,tired and have heard enough of this promulgation of every day PDP embezzlement of funds. If you carry out an investigation and found Goodluck Jonathan guilty,then prosecute him,send him to jail.

Others should be investigated and should meet the same fate if found guilty. What we Nigerians need now is food on the table. There is serious agitation among Nigerian populace especially over lack of employment and prices of commodities in the markets.

The company where I work announced last week that after Salla celebration, they are going to embark on massive retrenchment of workers that will see as many as 200 workers both male and female laid off from work.

Many here have started panicking and someone can understand their frustration. When we asked the white expatriate who owns the company the reason for their planned layoff,  we were told they are trying to cut cost because of economic recession.

So we can now see the glimpse of frustration, agitation and the cry among Nigerians now.

So far, prosecution and trial of money launderers-zero.
Reasonable Steps in fixing the economy-zero.
Nothing!

Does the APC government want the masses, many of whom cannot even read and write and are largely feeding on less than a dollar a day,who are also dying of hunger and malnutrition every day by day be happy with the government for bringing only incessant headline news of corrupt PDP officials?

All these headlines absolutely mean nothing to millions of hungry Nigerians. What the masses need now is action and practical ways to bring lasting solution to the famine that has struck the nation due to poor economic reform of the current government. And not the never ending drum beat of embezzlements of the past administration.

No wonder the empty slogan of change!change! Sai Baba,sai Buhari has finally ceased on the streets without anyone using the mantra.

The APC government have to wake up from their slumber and stop their empty deceit of never ending jingle bell in announcing PDP corruption and headlines of embezzlement that marked their predecessor’s government and seek for ways to reverse the catastrophic damage they’ve mostly caused our economy.

Do you have an opinion article, write us at naijagistsnews@gmail.com