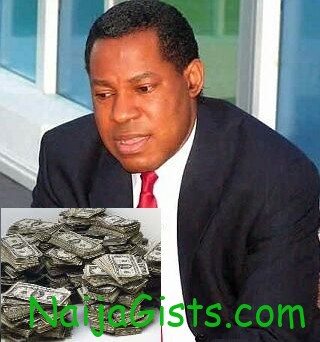 Here is very sad email we received from a supposed Christ Embassy Pastor on the issue one of their Pastors,  Pastor Paul Ade is faced with.

Why should a Pastor do all the work and payment becomes a mystery? The bible instructs pastors should be paid in “1 Corinthians 9:14” & “1 Timothy 5:17-18”. And we all gladly pay the electrician or accountant that provides service in our homes or church.

Why should a man be requested to leave his successful business to move to another province, start churches, make a success of the churches and hope to be complimented or thanked, but instead was aggressively removed because he suggested to be paid after many years of service at his own expense.

One of those things you hear happen in Africa but never thought it could creep into Canada. How the senior hierarchy of Christ Embassy aka Believers Loveworld of Pastor Chris decided to get rid of a fellow Pastor with every possible means.

While many were busy genuinely doing God’s work; a team led by Pastor Kay Adesina and Pastor Kehinde Ogbebor connived with some fellow members to make the life of Pastor Paul a nightmare.

Pastor Paul who claims to have served the Christ Embassy Canada church with distinction for over 10 years was hospitalized in Calgary Alberta on more than one occasion because of this unending conflict.

The Pastor Kehinde Ogbebor was also in disagreement with Pastor Paul over how he requested a refund of the money loaned to him.

Our source said none of these Pastors have ever being to the city of Calgary or Edmonton before but it was Pastor Paul who travelled 4 days from Toronto and created a Christ embassy church in Calgary and a year later he pioneered another Christ Embassy Church in Edmonton Alberta, which is 3 hours from Calgary.

They couldn’t find rest with their opinion that Calgary and Edmonton both oil cities was not befitting to Pastor Paul who in their opinion didn’t have a God father and couldn’t give large sums of money to them anymore. But Pastor Paul explained that it was because he left his business in Toronto to spread the ministry that made him less financially strong enough to do what he was able to do in the past. And the finances of these new churches have advanced the ministry projects and programs.

According to Pastor Paul, the arrangement has left him worse off, turned him from a landlord and home owner into a tenant; and every effort to talk to the leadership of the ministry has not yielded any result.

Especially when Pastor Paul suggested they should pay him a salary. Instead they decided to redefine who a Pastor is and tried to change him in a mafia gangster style. It’s like what you will see in a movie (threats, ambush, conspiracy and much more). When a businessman competing for a deal, conspires with a few people to discredit or kill an innocent man. No wonder many honest people are leaving the church to rather stay at home.

What could have made all these pastors to travel with “bodyguards” from Toronto on February 19, 2012 and April 22, 2012 to fight in Calgary, Alberta? Thank God the Nigerians in Calgary Alberta are not only known for truth but some also displayed their disappointment during this conflict.

Pastor Paul, was a Christ Embassy church Pastor in Toronto before moving to Calgary. We also learnt he was well known as a Realtor in the Toronto area before he moved to Calgary. It still baffles many to know that none of these pastors were paid, but instead the subject is not welcomed and most of the pastors struggle with the issue in fear.

The question now is if he is qualified to relocate to Calgary why should he struggle to discuss the basic necessities of life with those benefiting from the results. “You are the best man for the job” “See yourself having a big church” these and much more they said before the salary topic was introduced by Pastor Paul. A topic they have never discussed or mentioned to any of the other pastors with the exception of the top 1% of the pastors in the ministry.

Just a few days after the church hijack, Pastor Chris announced via online TV to all the churches that he is shuffling most of the pastors in Canada. But this only shows that he most likely ordered the church hijack in the first place because of the timing of this announcement and other things that shouldn’t have happened.

Thank God Pastor Paul has made a police report and his calling on fellow believers to join him in prayers.

This is a serious issue. God have mercy!