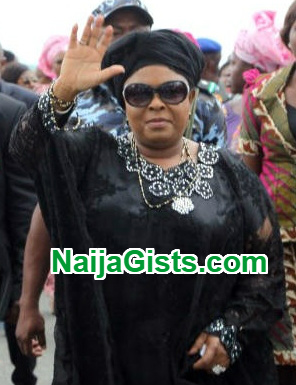 Mama Peace has come forward to tell EFCC that she is the owner of the huge amount of money in three bank accounts frozen by the EFCC few weeks ago.

The former First Lady dragged the EFCC to court on the 6th of September 2016 to claim ownership of the $31.4million involved in a fraud case before a Federal High Court in Lagos.

Dame Patience Jonathan asked the court to force EFCC to unfreeze the accounts because it violates her Fundamental Human rights as contained in the constitution of Nigeria.

How can the former First Lady claim ownership of such huge amount? Chai!!! this madam has finished us.

This is another confirmation of the massive looting that took place during GEJ tenure.

31 thoughts on “Patience Jonathan To EFCC: I’m The Owner Of The N13Billion In Frozen Skye Bank Accounts”