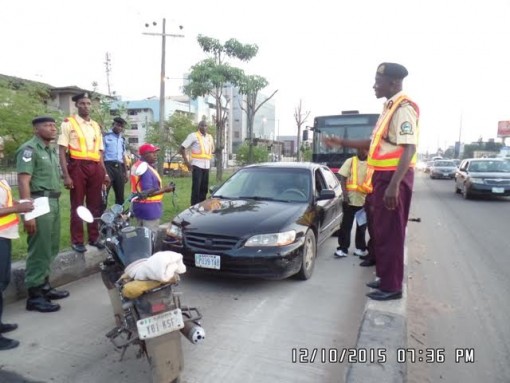 The soldier by the left

Irate soldiermen beat up an official of the Lagos State Traffic Management Authority, LASTMA for daring to take photographs of them violating the BRT Lane on Ikorodu Road, Lagos, Southwest Nigeria.

This is coming as the Lagos State Government warns military officers against violating the BRT Law.

In a dramatic fashion, the military officers threw caution and decency into the wind when they descended heavily on LASTMA official, Peter Owolabi, for daring to take the photographs of their black Honda Accord car with number registration CP 839 YAB which violated the BRT laws at Obanikoro bus stop on Ikorodu road.

The unruly attitude of the personnel attracted the attention of members of the public, who jeered and admonished them to respect civil authority.

The officers were stopped during a routine exercise to prohibit the illegal use of BRT corridor by other motorists. The violators were presented with fine ticket in accordance with the new approach of the agency of booking offenders on the spot and allowing them continue with journey without their vehicle being impounded.

However, unlike their civilian counterparts, the Military officers refused to collect the tickets and rather opted to obstruct movement of other vehicles from exiting the corridor and in the process caused pandemonium and created ugly scenes.

They rained avalanche of blows and kick anybody holding recording device or watching the show of shame. In the process, the agency`s cameraman was manhandled and camera smirched in order to prevent the recording of their uncivilized conduct.

General Manager, LASTMA, Bashir Braimah who led the officials out in the joint enforcement of the BRT violation lamented the act of indiscipline exhibited by the Nigerian Military as they violated the BRT laws with impunity.

According to him, “they should be the custodian of law but regrettably, they are working against the law. The law is no respecter of anybody and the road traffic law must be obeyed in order to ensure the safety of lives and property.”

Braimah hinted that over 15 vehicles belonging to the military violated the BRT law, saying that while some were civil and remorse, others were aggressive and unruly.
The General Manager noted that all the vehicles found on the BRT corridors were either driven by the military or with military paraphernalia hanging in the vehicles. He appealed to all security formations to collaborate and work in harmony with LASTMA so as achieve a common goal of a better environment.

4 thoughts on “Photo: Angry Soldier Beat Up LASTMA Officer Who Arrested His Car On BRT Lane In Ikorodu Lagos”