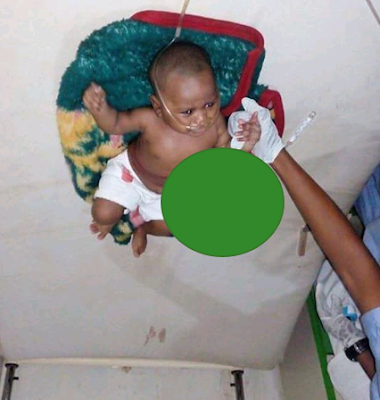 Earlier today, the viral photo of a baby boy with a knife stuck on his stomach went viral after a nurse at the Federal Teaching Hospital in Abakaliki Ebonyi state shared the photo on the social media.

It was later revealed that the suspect, a policeman’s wife carried out the attack at a police barracks in Abakaliki Ebonyi state.

We gathered that the woman who suffers occasional mental disturbance used a kitchen knife to stab her baby before the cry of the baby attracted neighbors who raised an alarm.

The 8 month old baby has been operated on and currently recovering at the aforementioned hospital.