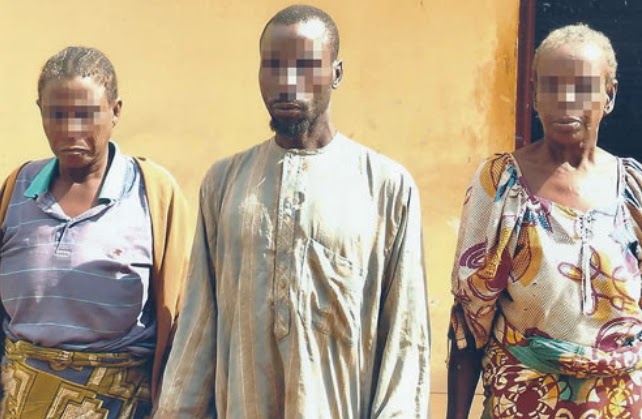 Pictured above are members of a bizzarre flesh-eating cult located in Kuso village in Lavun LGA of Minna in Niger State.

The 3 cult members were arrested  at the aforementioned village over the murder of an innocent 9 year old boy, Umar.

The evil people roasted his body, ate it and drank his blood.

The cult group comprises of Fatima (on the far right) and a man named Tetengi (in the middle) and another woman, Aminatu.

Prior to the victim’s murder, his father, Mohammed (surname withheld) had placed him in care of his mother, Fatima, pending his arrival from a short journey within the state – however, things turned out unexpected.

A police source at the Homicide unit of the Criminal Investigation Department, Niger State Police Command headquarters, Minna, disclosed that Fatima, who happens to be the first suspect, gave the boy to the second suspect, Tetengi with an understanding to slaughter the boy and share his body among the three of them which included Aminatu.

Investigations by the police revealed the victim was slaughtered by Tetengi, who roasted the boy and shared his body with Fatima and Aminatu as planned.

Upon his return from his trip with no trace of his son, the victim’s father reported the case at the Bida Divisional Police Headquarters, to unravel the mystery behind the disappearance of the nine-year-old boy.

The Police commenced preliminary investigation into the matter after which the arrests of the three suspects were made and the case was transferred to the Criminal Investigation Department of the state police command.

The suspects confessed to the crime during interrogation by the homicide detectives adding that human flesh was tastier than those of animals.

The Police Public Relations Officer, Niger State Police Command, Deputy Superintendent of Police (DSP) Ibrahim Abiodun Gambari, confirmed the incident saying “the three suspects confessed to the crime upon interrogation and were charged to court on first information report for the offence of criminal conspiracy, culpable homicide, cannibalism and killing of an innocent citizen, an offence punishable under the law.”