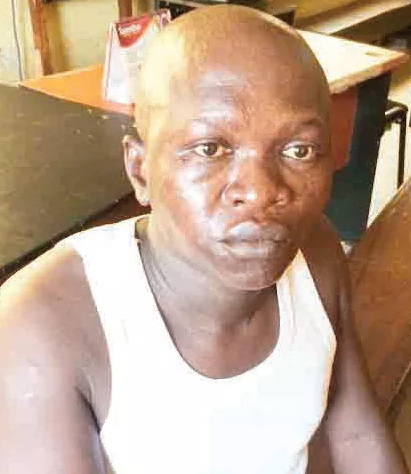 Innocent Nwobasi, a serial fraudster, who specialised in posing as RCCG GO Pastor Enoch Adeboye’s deputy, to defraud unsuspecting Nigerians, has been arrested.

The alleged fraudster who has used the antics on several victims, defrauding them of their life savings, was said to have a penchant for promising his victims special Jerusalem oil, bought with foreign currency. It was learnt that Nwobasi and an elderly man, now at large, would tell their victims that the oil would ensure their future prosperity, and save them from an ill-fated destiny.

It is believed that Nwobasi and his partner, hypnotised their victims into buying the cock and bull story. Nwobasi, who hails from Ezinihitte Mbaise, Imo State, was arraigned before an Ikeja Magistrate’s Court for defrauding several victims, including a widow. The men milked her N15m.

The fraudsters target mostly RCCG members. It was gathered that Nwobasi used to pose on Facebook as one Rose Agu, in order to lure victims to visit a particular building, which they used as a branch of RCCG. The widow, who craved anonymity, said between April to July this year, Nwobasi collected N15 million from her. According to her, Nwobasi created a Facebook group to dupe victims, whom he falsely led to believe he was Adeboye’s second in command pastor.

The widow said: “He said he had gone to Jerusalem and came back without the oil, demanding that I should look for additional N3 million in foreign currency, that was when I realised I was dealing with a fraudster.

I told him to come to RCCG convention; that we should meet there; he declined, shouted and cursed me. He threatened to kill me if I ever exposed him.”

On how she was deceived, the widow said Nwobasi said he was an RCCG pastor and made her to believe that her daughter would have a serious misfortune unless a sacrifice was done.

The widow said: “Immediately I met him somewhere at Abule Egba, he hypnotised me into believing everything he said. I was told to pay some amount of money for buying clothes, bags of rice, cartons of tin tomatoes for motherless babies’ homes and other items.”

Nwobasi was tracked and arrested while he was waiting for payment from another victim identified simply as Esther. Police were said to have used Esther to track the fraudster down in a hotel at Ejigbo area of Lagos Nwobasi asked Esther to buy him recharge cards worth N4, 000. It was in the process of handing over the cards to Nwobasi, that policemen swooped on him.

Before his arrest however, Esther had already lost N900, 000 to him. Another victim, identified as Ulumma, said she was conned through the fake Facebook account.

Ulumma, who thought she was dealing with a woman called Rose Agu, said the Rose told her she had a boutique in Abuja, and wanted to do businesses with fellow RCCG members.

Prosecutor, Peter Nwangu, an Inspector of Police, said Nwobasi fraudulently enriched himself through the sweat of innocent Nigerians.

Nwangu added: “When police arrested him and began investigations, it was discovered that Nwobasi has acquired two houses at Ajilete area of Ogun State. He had also bought two different plots of land with four block of flats. He drives a BMW car.”

Magistrates (Mrs.) O. Osasunmi, said Nwobasi should be kept in detention until a strict bail term is fulfilled. He should also pay bail charge of N3m, with two sureties who have landed properties in Lagos. The sureties must pay N100, 000 each, with verifiable addresses. They should also provide evidences of tax clearance. The case was adjourned till January 30, 2017 for mention.