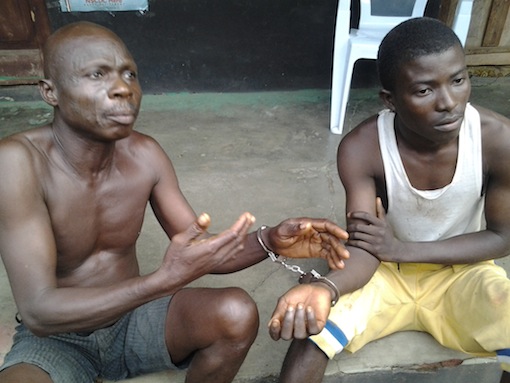 2 men were arrested last night by Police officials in Ogun State while attempting to exhume  a corpse for the purpose of ritual.

The suspects identified as Oke Akindele (50-year-old herbalist a native of Igangan Benin Republic) and Timothy Oniyide (a welder) both based in Yewa North LGA of Ogun State were picked up at Igan Alade Community in Yewa on Sunday night.

The third suspect, Monday Kugbi based in Kafe town fled upon sighting police officers this morning but his heavily pregnant wife was picked up.

Hear what the leader of the Police Squad who arrested them told reporters:

“We got the information that some persons were digging a corpse in Igan-Alade area and when we got to the area around 11:00 pm last night, we conducted our investigation and two names were given to us.
“We picked Timothy, who is the principal suspect at their house where the crime was conducted while his friend, Monday ran away upon seeing our men. We have arrested his wife and still in search of him.

“The herbalist, 50, was the man that gave them a soap to bath with inside a dug space on the corpse,”
We left the town for Abeokuta late last night and passed the night at Eleweran in Abeokuta.
“We were directed this morning to go back to Aiyetoro, the jurisdiction where the incident occurred for proper complain, from where the matter will be transferred to the headquarters,”.

One of the suspects, 19-year-old Timothy Oniyide said:

“Other people that went with me to the herbalist are Prophet Adiitu of Celestial church, Ijoun, Baba Bukky (Prophet Omilende), Igbogila and one other Prophet from Cherubim and Seraphim and three of my friends.”

The culprits are currently at Aiyetoro Police station.