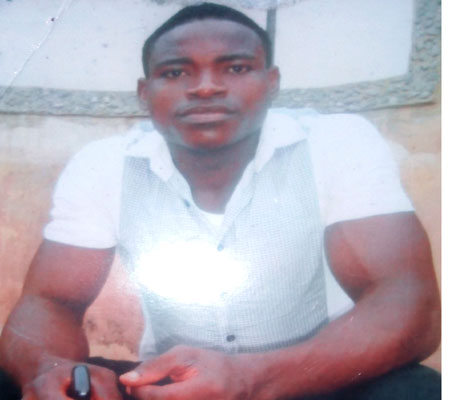 The family of Mr. Emmanuel Uwagbaokwu of Ohobo Afara in Umuahia North Council Area of Abia State, have called for justice following the gruesome murder of their 21 year old son, Ikechukwu Uwagbaokwu, allegedly by the operatives of the Abia State Police Command. Until his tragic death, Ikechukwu Vincent Uwagbaokwu was a student of Imo State Polytechnic, Umuagwo.

The Uwagbaokwu family is strongly linking the tragic killing of their son to a land dispute it has with the Ndukwe and Uwaga families. Specifically, the family is alleging that the said families framed their son and connived with the police to kill Ikechukwu because of the land dispute.

The land dispute was said to have lingered and was getting messier when the community’s traditional peace makers, Ibeku Okonko Arbitration Panel waded into it and had indeed fixed a date to hear from the families involved before one the parties lost one of the witnesses, prompting the rescheduling of the matter by the traditional panel.

However, five days to the rescheduled date, Ikechukwu was gruesomely murdered and the Uwagbaokwu family is pointing accusing fingers at the rival families in the land dispute. According to their petition to the Abia State Commissioner of Police, Uwagbaokwu family hinged their suspicion on an allegation from one of the rival families which had earlier accused them of being responsible for the death of their family member.

The Uwagbaokwu family, in the petition, written by their lawyer, Godwin Oriaku of Overcome’s Chambers, claimed that days before the burial of the deceased from the rival family, they [rival family] sent a warning message to them not to attend the burial ceremony, accusing them of having a hand in the death of their brother.

The petition also alleged that prior to the killing of Ikechukwu, “there have been threats issued at various occasions” by the rival family that lost a member that they were “going to avenge the death from the family of Uwagbaokwu”.

“On the 10th of September, 2015, Mr. Ikechukwu Vincent Uwagbaokwu, a Marketing Student of Imo Polytechnic went to bed at about 9.00pm but at about 10.50pm there was persistent banging on the door of the family house of the Uwagbaokwu.“When Mr. Anthony Uwagbaokwe (elder brother of deceased) came out to see who was banging on their door, lo and behold, there were about ten fierce men in Police uniform who had taken strategic positions in the surroundings of the house. “One of the men in uniform, who came with Hilux pick up van and black Camry Saloon Car, hit the door of one of the occupants of the house and forced it open. When the occupant came out, the men in police uniform, who refused to identify themselves, said that he was not the person that they were looking for.

“The Police went to the direction pointed to by those who allegedly brought them. The armed policemen forced the next wooden door open and on sighting Ikechukwu Vincent Uwagbaokwu, one of the policemen allegedly shot him and he died immediately. “Our clients raised alarm but nobody came to their rescue. The matter was reported to Ehimiri Police Station in whose jurisdiction this area falls, where the Divisional Police Officer (DPO) gave them order to deposit the deceased at Madonna Mortuary in Umuahia,” the family stated

The 54 year old father of slain Ikechukwu, Mr. Emmanuel Uwagbaokwu, has therefore appealed to the Inspector General of police, Solomon Arase to order a comprehensive investigation to properly unravel who are the killers of his son.

The family lawyer, Godwin Oriaku, insisted that the Police Commissioner has the petitions which he forwarded to the CID department to investigate. In fact, Oriaku claimed that four suspects have been arrested but alleged that the Ehimiri DPO was still shielding the alleged killer cop even as he said that his clients would demand for a thorough autopsy to determine the type of bullet that killed their son.