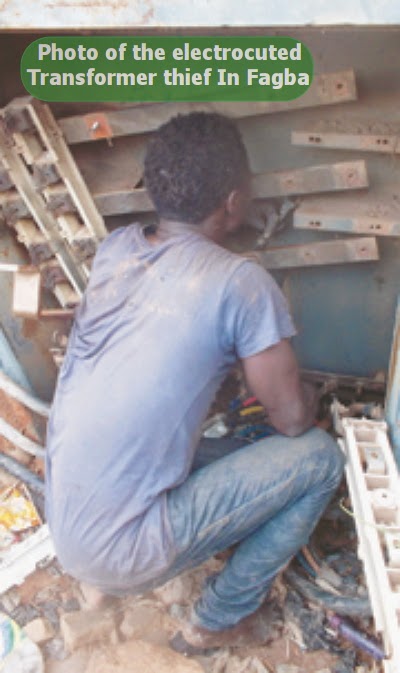 A young man has met his untimely death while stealing from a transformer in Fagba area of Lagos state Nigeria.

The unidentified man from the North was electrocuted early this morning while attempting to removed feeder pillar units from an electric transformer at Lonlo Bus Stop along Iju Road in Fagba today.

The victim, who was in a pair of jeans and black T–Shirt, had succeeded in removing one feeder unit, but luck ran out on him while he was trying to remove another one from the Mitchell 500KVA when electricity supply was suddenly restored.

The corpse (pictured above) of the young man believed to be from the North was found by a teenager today on his way to fetch water in the area.

A witness, Mr. Egunjobi Samuel, said that vandals had been tampering with their transformer for a long time, adding that luck ran out on the victim because God wanted to expose one of them today.

“We have been experiencing this thing for a long time. Some people will just come and remove some parts from this transformer. God decided to expose one of them today. It serves him right,’’ Samuel said.