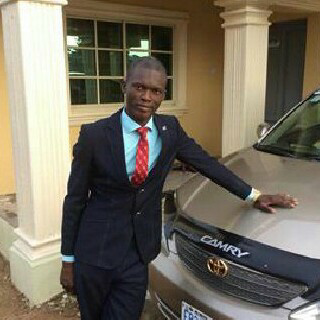 Pictured above is 27-year-old Nigerian who graduated from North American University in Cotonou Benin Republic.

Mr Valentine Olalekan Jegede, a computer science graduate left his hometown of Kanji in Niger State on the 28th of April to collect his result at NAU in Cotonou in preparation for his NYSC.

While returning from the school where he had gone to collect his Bachelor of Science degree certificate, he branched at his friend’s place in Ijede area of Lagos where he spent the night.

This past Monday, he left Lagos around 9am for his base in Kanji before he went missing.

His dad said the last time he spoke to him was on Monday at a motor park. He reportedly informed him that he was in a bus travelling to Kanji that was scheduled to take off soon.

This is what Oluwaseun Jegede told the police;

“He told me on the phone that he was at a motor park and that the bus would soon take off.

“One hour later, I tried to get across to him, but his line indicated that it was not reachable. I became confused when it was evening and I did not hear from him.

“I called his friend’s mother, but she was confused too. We have been in darkness since then. We have no idea of where he could have gone to. I just pray he is safe wherever he may be. I jubilated when he informed me that he had collected his result and I promised him a special celebration. He was preparing for his NYSC. The family is in deep sorrow now. Her mother has been crying.”

His mother Ronke Jegede also appealed to the public to help find his first son.

“He is my first son and they are only two. Please pray along with us for Valentine to come back home safe. I believe it is not big for God to do. He is gentle and God-fearing.

Sources said police raided Ikorodu Lagos Motor park the same morning Valentine went missing after a riot. However, his name was not found on the list of those arrested during the raid.

If you happen to know his whereabouts, please call any of the numbers below: