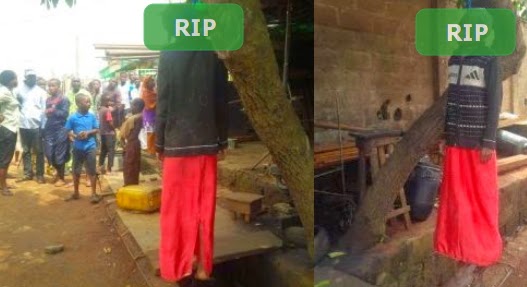 Pictured above is the lifeless body of a Liberian lady who allegedly took her own life today in Magodo area of Lagos after she was stigmatized by concerned Lagosians following the Ebola outbreak in Nigeria.

The lady identified as Kate was found dangling from a tree on Bankole street in Isheri Oke in the wee hours of Friday.

Sources say Kate worked at a pure water factory in the area and lost her job when the Ebola virus disease hits Lagos. Since then people have started distancing themselves from her even her close friends parted with her.

In the process, she became gravely ill due to lack of shelter and adequate nutrition.

She ended up killing herself today.

This is what a resident of the area told Punch NG:

“We see her in this neighbourhood every day. I used to see her every day in the dress she died in.She always looked sick but people stopped selling to her after the Ebola outbreak. It could be because she was Liberian and looked sickly. This might have frustrated her.”

What happened to others around when she was tying herself to that tree, hope this is not an assisted suicide.

Please our people should stop this stigmatization of a thing.