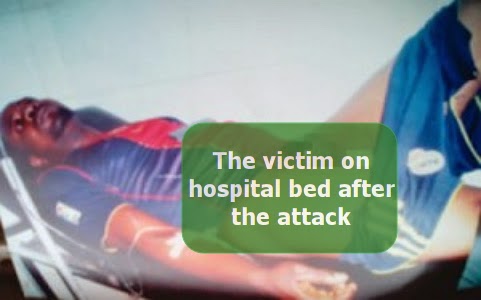 A family man is clinging to life at the hospital after his scrotum was slashed open by his landlady’s son with an unidentified object.

The man identified as Yinka Offehin who resides on Popoola street in Ikotun Lagos with his family was attacked early Thursday morning while sleeping in his room with his wife, Bisi and children.

According to Bisi Offehin, the 35-year-old man had a misunderstanding with the landlady and she ordered them to pack out.

He sought for help from the community leader who ordered the woman to give him till the end of August to pack out.

This is what Bisi said about the gruesome attack that landed her hubby in the hospital:

“On Thursday morning, around 3am, while we were sleeping, we heard loud bangs on our door. We initially thought they were armed robbers because the house beside ours had recently been robbed.

“When they entered, we saw they were children of our landlady. They began destroying our electronics and other property.
“There were two of them. One held a knife in his hand. They took N800, 000. They descended on my husband and he also fought back. In that confusion, my husband shouted and we saw that one of the attackers had cut Yinka’s scrotum. I can’t say what they used to cut off my husband’s scrotum.”

“I was asked to leave the house immediately, but after the intervention of the traditional ruler of the community, I was asked to leave by the end of August.
“But that decision did not go down well with the children of my landlady and they continued to make trouble with me.
“I was already planning to leave their house and had even contacted an agent when they attacked me without any provocation. I want the government to fight for me,” .

“It was around 3am, while the victim was sleeping in his room, that one Solomon Olowogbemi and Damilola Olayeye, the children of his landlady, came in and started fighting with him.
“In the process, they inflicted injury on him with an unknown object. The skin of his scrotum was partly cut off, thereby exposing one of his testicles. The two suspects have been arrested and detained and the victim taken to a hospital.”