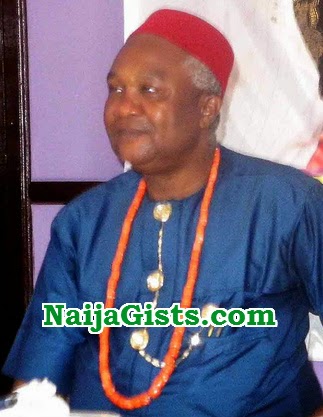 There was chaos in Aguda, Surulere area of Lagos recently, as fire gutted the home of the President-General of Igbo-Speak­ing Community in Lagos State, Chief Eb­ere Ubani.

The four children of the Igbo leader were rescued safely from the burning house, but the businessman lost personal and household belongings worth over N10 million in the inferno which started at noon. The house is at No 85, Brown Street, Aguda, Surulere.

His four children who were at home but not aware of the fire would have been burnt to death but for the vigilance of some auto technicians working opposite the building as well as other neighbours who saw billows of smoke pouring out of the house.

Chief Ubani a retired Assistant Commissioner of Police, his wife, security men and other aides were absent when the incident occurred.

The fire, which started at the back of the building, completely destroyed the two bedroom boys’ quarters and had spread to the main building before it was put out by the neighbours.

Eyewitnesses stated that the mechanics noticed that thick smoke was emanating from the back of the house and quickly alerted the children inside the house by banging the iron gate.

The children, who were playing inside one of the rooms, were not aware of the fire, which had nearly taken over the entire building. Firefighters were quickly called in, but the fire had been put out before their arrival.

The cause of the fire was not immediately known. Chief Ubani said he didn’t suspect any foul play about the incident, pointing out that only an investigation being carried out by the security agents would state whether or not there was sabotage.

While expressing gratitude to God for saving the lives of his four children that were rescued safely from the burning house, Ubani thanked all those who risked their lives to put out the fire which, he noted, could have completely razed the entire house.