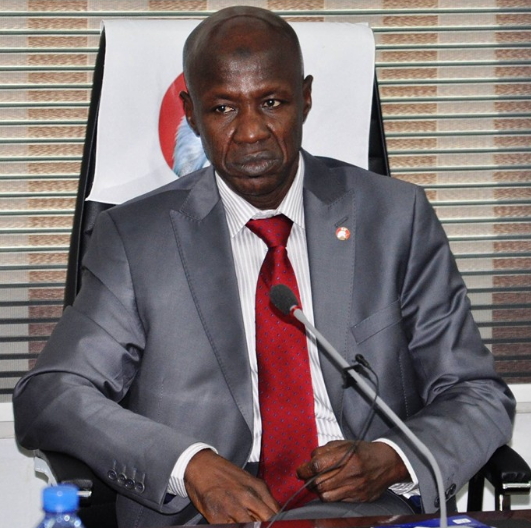 Mr. President should not be cowed by the Senate to give-up his anti-corruption drive because if he allowed this to happen Nigeria is doomed forever. It has to be Ibrahim Magu or no deal. We urge PMB to allow Ibrahim Magu to remain the Acting- Chairman of the EFCC since he was appointed in that capacity pursuant to Section 171 of the Constitution.

This is corruption fighting back. It is also a known fact that while every politician thinks of what he or she can possibly loot for himself as demonstrated so far, Mr. President is concerned with saving for all Nigerians.

From all indications “Corruption” is deploying every weapon in its disposal to scuttle the wonderful job Ibrahim Magu is doing and to think the Red Chamber would gladly give Magu a clean bill of health could be regarded the greatest miracle of all time.

Corruption to Nigerian politicians especially those in the Red Chamber is a way of life and for a single individual to challenge such excessive frivolity, requires extra-ordinary courage and divine intervention.

They have looted our collective patrimony, built empires home and abroad to be jealously guided and protected from whatever laws. And this explains why the likes of Ibrahim Magu would always remain a threat. While the DSS may have their reasons for frowning at Ibrahim Magu confirmation as Chairman of EFCC, we could boldly say that he has shown courage and professionalism to Nigerians and the outside world to continue doing what he knows how to do best. Through his effort money buried in farm tank, suck-away toilet, personal closet, abandoned in Airport, starched in ghost Bank Account have all been recovered.

We urge PMB to stick to Ibrahim Magu as the Acting- Chairman till the end of his tenure since our constitution clearly empowered him to do so. If the Head of the Senate is allegedly corrupt, there is nothing the Body could do to convince ordinary Nigerians that its benchmark is to rely on “Integrity test” from the DSS. We all know many rose to the seat they are occupying today on the crest of President Muhammadu Buhari’s integrity because they lack one.

So why looking for a saint to head EFCC in Nigeria? We all know many Senators have corruption cases hanging on their neck. We must start from somewhere and as far as Nigerians are concerned they are extremely satisfied with Ibrahim Magu’s performance and this we are certain PMB is also proud of, as no time in Nigeria EFCC could summon courage to arrest the big thieves.

Only God Almighty is perfect. Ibrahim Magu may have integrity test but we should have in mind that “Integrity” is one of the scarce commodities in Nigeria. Whereas, Nigerians in their millions would bet with their life that 99.9% of those in Red and Green Chambers all have skeletons in their cubic.

Ibrahim Magu may as well lacks fluidity and oratory embellishment in answering questions but the truth of it is that he has demonstrated capacity, doggedness and swiftness in fighting corruption with which the looters are not comfortable with.

It is a living testimony that Ibrahim Magu is not in a good book of the Senate. It could be recalled, when Senate President’s wife was invited by the EFCC the heaven was let loose led by the-In-House fighter Senator Dino Melaye who accompanied and defended her before it.

A series of allegation against the Senate President Bukola Saraki at the ongoing trial at the Code of Conduct Tribunal (CCT) would not go away because it is believed EFCC can not be compromised yet provided it key evidence to nail him.

Thus this is the pay back time for the Senate and in its vendetta overwhelmingly rejected Ibrahim Magu for the second- time in a row. Yes they may have rejected him to ridicule him the more but the more they do, their motive is exposed and Ibrahim Magu’s reputation surge.

On a final note Mr. President must begin to assert his authority to proof to the us and the rest of the world that he is indeed in total control against the theory of certain cabal high jacking his government, certainly this is not the Change Nigerians voted for.

Who is DSS working for? Presidency or self interest? For such a conflicting report emanating from the same source is regrettable and if Mr. President does not put his house in order then he has lost it, if not who is DSS to question his boss, we mean PMB’s choice of a candidacy, if not to ridicule him before the rest of the world.

Yes PMB is now a democratic- convert but nothing stops him from adopting Obasanjo’s style of leadership when its comes to having his way at the National Assembly.

President Buhari must rise- up to the occasion and save his heard-earn reputation from impending collapse.