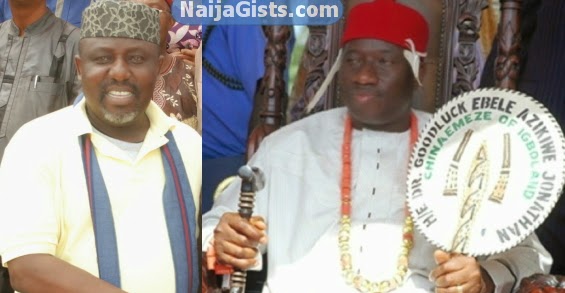 “In 2015 I will be the president of the country,” Okorocha declared to loud cheers from broom-wielding members of the All Progressives Congress at a rally attended by prominent members of the party in the South-East.

He said his name would come first on the list of APC presidential aspirants and that when the party’s aspirants were being counted, his would be mentioned before those of a former military Head of State, Maj.-Gen. Muhammadu Buhari (retd.); former Vice President Atiku Abubakar; and Kano State governor, Rabiu Kwankwaso.

He said, “Three months ago when I said I want to be president they asked, “Can an Igboman be president?”

“But now when they count those contesting for president they will first count Rochas Okorocha, before Buhari, Atiku Abubakar and Kwankwaso.

“When they said they have zoned the presidency to the North, I asked, “When was the meeting held?”

“Now we have zoned it to Igboland. In 2015, there will be a turnaround in the fortunes of Ndigbo.”

Recalling the suicide bombing at a school in Yobe State earlier on Monday, in which several students died, Okorocha said that the PDP had failed God.

He said Igbo had been neglected by President Goodluck Jonathan such that no Igbo man is currently occupying any prominent position in the country.

He also accused prominent Igbo PDP politicians of not caring about the well being of Igbo.

“They only know themselves; they don’t care about Igbo. APC is an emergency party for a new Nigeria; I would not have joined APC if PDP was doing well. We will defeat PDP in 2015,” he declared.

Okorocha stressed that he had the resources to realise his ambition, noting that he was richer than his rivals in the PDP.

Continue Reading
You may also like...
Related Topics:igbos, jonathan, Okorocha