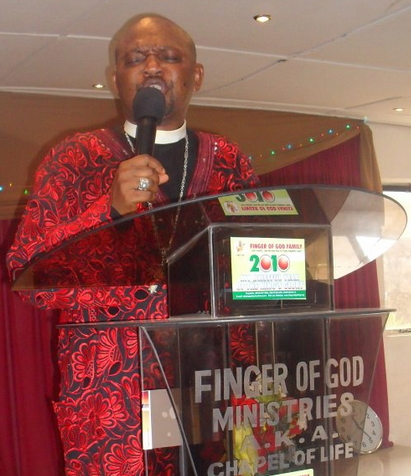 Before he had a divine encounter which led to his conversion to Christianity, he was hooked on cocaine for several years. Not only that, at the peak of his addiction to hard drugs, he had to use his son as a collateral in order to obtain cocaine from a dealer when he didn’t have money to pay for the hard drug.

But today, Kayode Peller is a new creature. From his addiction, he has now become a preacher of the gospel of Jesus Christ travelling to different parts of the world not only evangelizing but also campaigning against the use of hard drugs.

In an encounter with our reporter Peller, who is the General Overseer of Finger of God Ministries, with its headquarters at Agbado, in Lagos, spoke on the genesis of his romance with drugs and how he met Christ.
According to the cleric, who is the second son of the renowned late magician, Professor Moshood Abiola Peller, he made money early in life, but later strayed into bad company, a situation that not only almost ruined him but would have resulted in his death.

“I was born into opulence. My father, the late Professor Peller was one of the best magicians of his era. In Africa, he had no equal, while throughout the world he was the second best. He not only acquired global fame through magic, he also made a lot of money. At very early age, I started following him to circuit shows, and from there I gradually acquired magical powers. I was then referred to as Young Peller”, he stated.

Peller further revealed that he later left his father’s group to stand on his own after he felt that he had acquired enough experience and tutelage.
While adding that his own fame started spreading within few years of practice, Peller said he organised several magical shows not only in Lagos but across several states in the country.

“With the experience I acquired from the Federal School of Magic set up by my father, and London School of Magic, I became an instant success with fans. People were trooping out to watch my shows. Money now started coming. I became wealthy and married four wives. I also had about nine cars and also built five houses. It was at the height of my fame that I eventually got strayed into hard drugs which almost ruined my life.”

Narrating the genesis of his romance with cocaine and heroine, the cleric said some friends introduced the drugs to him, telling him that it would not only help to enhance his performance on the stage, but also give him energy he required to perform at his shows.

“This was how my problem started. I eventually became addicted to hard drugs. I was addicted to the extent that if I was broke, I would sell any of my belongings to satisfy my lust for cocaine. Gradually, I sold eight of my cars and four of my houses to buy cocaine and later heroine.”
However, Peller didn’t stop there as he later had to use his son, Tunji as a collateral to get cocaine from a dealer in Ibadan, Oyo State.

Recalling why he took that unusual and strange action, the cleric said: “It was on one of those occasions that I was very broke. By this time, cocaine addiction was already taking its toll on my life and magic business. I was more addicted to cocaine than to my business. I even had to leave Lagos to Ibadan tricking my son in the process that we are visiting a relation. When we eventually got to Ibadan, I went with Tunji but when I was leaving after getting the cocaine, I lied to the young boy that I will soon come back to pick him. But it was not until five months after that I returned to pick the boy.”

On how he met Christ, Peller said that things started getting from bad to worse for him and all his accumulated wealth were gone, but lost largely due to his unquenchable lust for cocaine. It was at that point that he became sick and had to be taken away from Lagos to Ibadan by his mum.

“I met Christ on my hospital bed on December 9, 1989 at Tamaria Hospital. Actually, it was the doctor that was to carry out surgical operation on me, Dr Tobi James that preached Christ to me before I was wheeled to the theatre. I came from an Islamic home, but while this doctor was preaching Christ to me, and the need for me to become a born again, something like a scale fell from my eyes, and at that point I came to my senses. I started crying when I looked at myself wearing ordinary bathroom slippers and not only that but also looking sickly, and ordinary. I wept bitterly. It was at that point that I realised I was living a sinful life. I later surrendered my life to Christ.”
While saying that, he thanked God that the operation was successful, Peller added that after recuperating, he started worshipping at the doctor’s church, Christ Believers Gospel Church, and was a member there for four years before he set up his own ministry.

On why he didn’t return to his magic practice, Peller said: “The Bible says that whosoever is in Christ is a new creature. Having found Christ, I’m now in the light, what do I have to do with darkness again? I became a preacher with Dr James’ Ministry. We later started city to city crusades where I was giving testimony about my past, and how Christ saved my life. Although some people were not comfortable that I not only dumped magic, also Islam my father’s religion, but I was not bothered – I faced persecution but Christ saw me through.” Peller, who has also set up a rehabilitation centre for drug addicts in Ijaye area of Lagos, said he was motivated to do so in order to help addicts return to normal life.
“Drug addiction is worse than anything you can think of. It kills and destroys people’s lives. Many of young men today have been destroyed by addiction. With my own experience, I then made a vow that having found Christ, I will also commit my life to young souls perishing as a result of drug addiction.”

Expressing his joy that he has a good testimony to share with others today, Peller said that after his conversion to Christianity, God has multiplied his blessings as he has recovered from all the losses of the past.

“Today, my joy is full. I’m very happy. Jehovah, the Living God whom I serve has increased my joy. Tunji, my son whom I used as a collateral to obtain cocaine is now a university graduate, happily married with his own family in London. I’m full of praises to God.”

Insisting that magic is evil, the cleric said any genuine child of God should not have anything to do with it, adding that it is not impossible that some ministers of God use occultic powers to perform miracles in order to attract crowd to their congregation.

“Right from the biblical era, this has been happening. You see genuine men of God, and you see some using evil spirits to perform wonders. It is only when you have a discerning spirit that you can know the difference. Jesus Christ even said it that it is not everybody that calls Him Lord that are genuine children of God. Magic is evil, anybody involved in it will go to hell. I thank God that Jesus Christ redeemed my own soul”, he added.