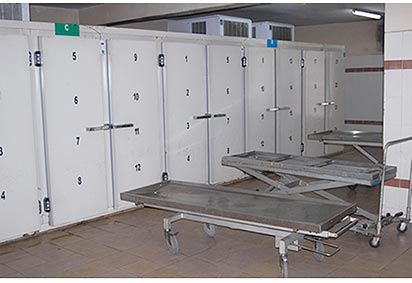 Police averted violence at the Benin City Central Hospital on Friday following the mysterious disappearance of two corpses from the hospital morgue.

It was gathered that relatives of the deceased persons had gone to the hospital on Thursday to collect the corpses for burial when they discovered that they were missing from the hospital mortuary.
The discovery caused stair and confusion at the hospital, as no one could offer reasonable explanation to the deceased families.

Michael Idemudia, the eldest son of one of the deceased, who spoke on behalf of the family, said his father died while he was being taken to the hospital for treatment.

He explained that his 54-years-old dead father, a retired police officer, was deposited in the mortuary on the 18 November, 2015. He said he went to collect his clothes on the 21st of same month but could not understand why the corpse will be missing on the day of the burial when arrangements have been made.

Idemudia alleged the hospital management was doing nothing about it, rather they locked everywhere.‬
“My name is Idemudia Michael. I live at 23, Omomo Street off St. Saviour Road. He is my father, and we are from Ovia North-East local government area.

“We brought the corpse on the 18th of November, 2015 to this hospital.‬ We were rushing him to the hospital when he gave up and we brought him here. When he died, we were looking for money to burial him. We came to check on the 21st when they called me to come pick up his clothes.

“About two days ago, we came to clear the bills and we had no chance to check him again because we were in a hurry. That is where we made the mistake of not checking him. When we came on Thursday to carry the corpse, it was nowhere to be found and the burial is Thursday and Friday.
“The hospital management said we should take it easy that they are going to investigate the matter,” Idemudia said.

The family of late Lawrence Agbonlahor, whose body is also allegedly missing from the hospital mortuary, also narrated the suffering they have been made to go through as a result of the incident.‬

The younger brother of the deceased, Friday Agbonlahor, said he saw brother’s corpse three days ago and could not understand how it suddenly disappeared.‬

“In this country, everything you suffer even the dead, to collect the corpse. I came to see it twice in not less than three weeks to ensure that they take care of it. Only for us to come today (Friday) to remove the corpse and it is nowhere to be found.‬

“On Monday we saw the corpse and even on Thursday when we made preparation for the burial, they said we should not see it since the burial is on Friday.‬

“This morning somebody came to tell us that there is a problem in the mortuary because of missing corpse because they locked up everywhere. I never envisaged that I will not be taking my corpse, only to get here they are telling me a different story,” Agbolanhor said.

The hospital management could not be reached as they were said to be in an emergency meeting likely to resolve the mystery surrounding the missing corpses.‬

Following the incident, family members who deposited corpses of their dead ones at the hospital were alleged to be transferring them to other mortuary.‎