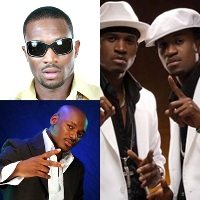 If you are looking to get the most accurate report on the Richest Nigerian Musicians and artists in 2012 and probably a forecast for 2013, you are in the right place. naijagists.com

Welcome to NaijaGists.com’s fact corner. In this section, we’ll provide you with the most accurate information on the notable Nigerians and entertainers.

In our previous article on the Richest Nigerian Musicians in 2012, P-Square got the vote.

There seems to be conflicting reports on the richest Nigerian artists in tabloids and entertainment blogs, while some report that TuFace (2face) Idibia remains the highest paid and richest entertainer around, some believed that the multi-talented group- P square cannot be rivaled, there are a group of blogs that believed that the rave of the moment- Dapo Daniel Adebanjo aka D’banj earns more than the rest. Regardless of how you want to look at it, these three Nigerian artists’ names appear to be the richest in the industry.

According to recent researches, the six richest Nigerian artists in right now are;

P Square music duo who have stars all over the world are comfortably sitting at position number one according to a latest report.

The twin makes over $100,000 minimum to perform in foreign shows are the richest Nigerian musicians of this age.

D’banj who is sitting on number two spot is another popular Nigerian Musician who have cut across national barriers.

WizKid is one of the fastest rising Nigerian musicians around, at 23 this versatile act is believed to possess the qualities to take over the music scene especially with his recent collaboration that has earned him great collaborations with top world entertainers such as Akon, Young Jeezy, and Kardinal Official. Wiz Kid is believed to have signed an undisclosed multi-million dollar deal with Akon’s Convict music label and the deal has set the young artist as the 4th richest artist in Nigeria at the moment.

Don Jazzy comfortably sits at number 4, he was formerly the CEO of Mo’ Hits records which he co-owned with D’Banj for over a decade before they broke up in 2011. Don Jazzy has since moved on with a new record label-Marvin which is believed to be worth several millions of dollars.

David Adeleke aka Davido, the son of a millionaire has been making a lot of waves lately. He recently acquired a 140 Million Naira in Nigeria few months after acquiring two brand new multi-million Naira jeeps.