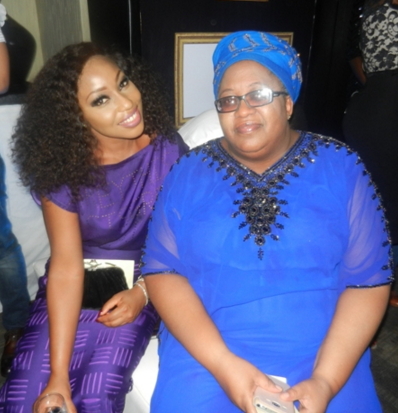 In a recent chat with Olushola Ricketts, Rita speaks about the movie, the challenges of being a producer and the joy of working with Mildred Okwo, a business partner.

When did you decide to venture into production?

I am still an actor, l like to call myself that. I started acting in 1998; after studying theatre arts I came into the industry. I always wanted to try different aspects of filmmaking. I wanted to be a producer, I wanted to be behind the camera to see how things are done and how I could contribute to that.

So some years ago, Mildred Okwo who manages my career as an actor, told me about her ideas for the movie industry. To be quite honest with you, I liked where she was coming from, I liked her idea and what she wanted to do.

I wanted to do what she had in mind. I then decided that I would partner with her and this is where we are today. It has been good so far; at least we have been able to produce the second film, Surulere. The Meeting was our first and it was highly celebrated.

Your first effort in movie production, The Meeting did well and claimed many awards. How did you feel about that?

I felt elated and that really e n c o u r – aged me to venture into another project. I mean the success of the first one encouraged me to go ahead to produce Surulere, a romantic comedy.

What message are you trying to pass with this new movie?

It is just a story a lot of people can connect with because I know we have many young people out there who are struggling to make ends meet. What makes Nollywood exciting is the simple story that we tell and that is what we try to do at the Audrey Sliver Company. We tell those simple stories in a bigger level; this is what Surulere represents.

We thought that a lot of young people would be able to relate with characters in the story. Nigerians have that hustling spirit; that is what Seun’s character tries to project. We also have other hilarious characters that make the film a movie everyone must watch.

How long did it take you to put the movie together?

The production proper took us 10 days, but we spent months for preparation and planning. We were sure of what we wanted to do before we set out for the production of the movie. It then took a year for it to come out.

Why did you play a bit role in the movie?

That was what the Director wanted me to play. She asked if I would love to play the role, reasoning that we would need my face to sell the movie. It is my movie, but I don’t have to play the lead role. I would only play the roles I fit into.

Do you want to give us an idea of the amount that went into the movie?

No, I won’t say anything about that. I just want people to go and watch the movie; it was released to the cinema yesterday across the nation. Some of the cast and I would be going round to relate with the audience and sell tickets. We are making plans on some other projects too, but we’d like to keep the details to ourselves for now.

Were you not concerned about the global meltdown?

The truth is that the Nollywood audience is still our audience. They still love what we do; that alone encourages producers to keep on putting movies out for them to watch. Regardless of any situation, the audience really like what we are doing.

Actors complain a lot about being cheated, underpaid among other things. How would you react to this now that you are a producer?

To be quite honest with you, anyone who goes behind the camera and is able to get a film out for the public to see should be celebrated. Handling, organising the whole set thing is challenging. But for me I believe that once your cast and crew are happy they would give you their best, though you have to be firm at the same time.

It is like finding the balance to make sure that your cast and crew are comfortable and getting the job done too. I don’t do this alone; my business partner is very much involved in all these things. It is a team work really.

How do you intend to spend this year’s Valentine’s Day?

It is for me to know and for you to guess.

Being a romantic comedy did you deliberately push the release of Surulere to the Valentine celebration?

It was the date we got and we felt it was great because it is a romantic comedy coming out during a love season. So we expect lovers to spend their time watching it.

What are the challenges of being an entrepreneur?

That is why I am so grateful to God and my business partner. She encouraged me to go on this journey with her. Inasmuch as I wanted to be a producer sometimes you need people to push you or tell you that it is okay to take risks.

Who knows what I would have done without her? I am just grateful she encouraged me to pick up production, though it is not easy to produce films in this country. Every day we learn, every day we keep pushing and we are hopeful we would take the industry to the place it should be in no time.

How do you intend to make sure your film won’t be pirated?

This piracy thing is really a big deal. The government needs to enforce some of these laws and create an enabling environment for the industry to thrive. If this industry is well structured, it can generate a lot of revenue for this country. There are laws against piracy; all we need is enforcement.