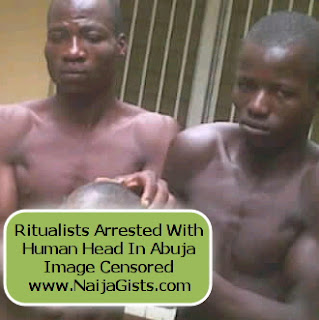 A ritual killer identified as Joan Yakubu popular called Tambaya and his accomplice were arrested on the 22nd of July in Abuja following a brutal beheading of a neighbour’s child.

25 year old Joan Yakubu and his partner-in-crime, Ishaya Dukulung, 30 were arrested by DSS Officials in Abuja.

Yakubu claimed a friend of his who requested for a fresh human head to be sold to a client in Abuja has promised him huge cash in return.

“I cut off the head of Danjuma after I persuaded him by asking if he would like to eat bread and he answered yes! So I bought bread for N50 and gave him and while he was eating, I asked him to go with me to a nearby river for a swim which he did. “When we got to the river, I entered the river while he stayed away. I told him to join me while I pretended to be washing my feet. I forced the boy to drown before I cut off the head and left the main body in the river.” –  Yakubu confessed

He later kept the head in a bag and took it to his accomplice Dakulung where they later headed to Abuja to meet the potential buyer.

How The Ritualists Were Arrested In Abuja

According to Ibrahim Halilu, the assistant director of operations, the two suspects were arrested at about 01:30 at AYA junction with fresh head of a boy of about 7 yrs old.

The victim has been identified as Samu Danjuma from Anquwan Galadima in Nasarawa State.

The ritualists were arrested after a tip-off from a witness on their way to the buyer.

These ritualists are heartless.