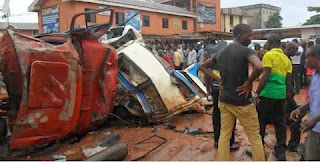 The accident that happened along the Toll-Gate in Sango Ota area of Ogun State today claimed one and injured 14 others.

FRSC Unit Commander in Sango Ota, Omatu Sunday said the fatal crash was caused by the reckless driving of a Dangote truck driver around 9:50am.

He said that the brake of the Dangote trailer that was heading to Lagos failed and ran into four vehicles which resulted in the death of a conductor in a commercial bus while 14 others sustained various degrees of injuries.

The commander attributed the cause of the accident to speed and carelessness by the Dangote driver.

The corpse of the conductor had been deposited at Ota General Hospital mortuary while the injured were moved to Leadway Hospital in Sango Ota for treatment.