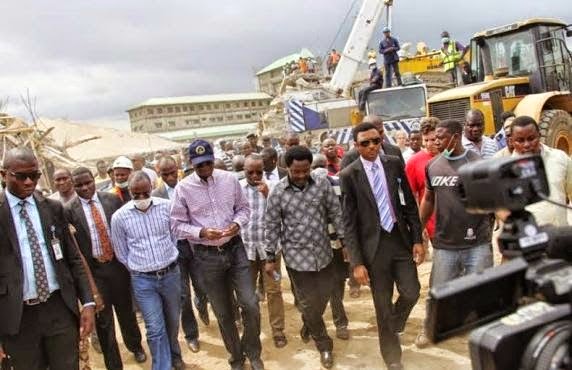 The Lagos State Government has indicted Prophet Temitope Joshua, General Overseer, Synagogue Church of All Nations, over the collapse of a 6-storey guest house in his church.

Death toll in the tragedy which occurred last Friday has hit 80 as rescue workers intensify efforts to evacuate the remaining victims trapped under the rubble. There is likely no hope of any more survivors.

In a statement issued on Wednesday, the Lagos State Government insisted that Joshua did not have approval for the building, therefore the addition of more floors to the existing two-storey building was illegal.

The government, however, said investigations were still on as to why the building collapsed.

Commissioner for Physical Planning and Urban Development, Olutoyin Ayinde said government would not shut down the church until investigations were concluded.

Ayinde expressed sincere condolences and sympathy with those that lost their loved ones and those that were injured in the unfortunate incident.

He said the Government and indeed the Ministry was particularly saddened that innocent lives were lost.

The Commissioner clarified that no plans were in the offing to take over the collapsed structure site until thorough and detailed investigation as to the cause(s) of the collapse had been concluded.

According to him, government is conducting a preliminary investigation into the cause(s) of the collapse and would leave nothing to chance to unravel what cause the building to collapse.

He added that if there was any violation of relevant planning laws, government would take appropriate action.

To this end, Ayinde said a team of engineers from the Ministry and other state government agencies were taking samples from the foundation and materials from the wreckage of the building for detailed analysis.

He stressed that government does not arbitrarily take over properties when testing to ascertain the structural integrity of any building that collapses.

On the veracity of the “Strange Plane Theory,” alleged to have dangerously flown low over the building 50 minutes before the collapse, he said the Ministry had submitted the video clips, as provided by the Church to the Nigerian Civil Aviation Authority (NCAA) with the coordinate of the collapsed site for investigation and professional comment.

Meanwhile, the Chairman of the Lagos State House of Assembly Committee on the Environment, Tobun Abiodun, has expressed belief that some government officials may have allowed themselves to be compromised and influenced to allow the church conctruct the collapsed building illegally.

Ordinarily, officers in-charge of physical planning in the state are supposed to act where buildings become defective or where they do not follow laid-down procedures, he argued.

Tobun, who described the incident as a major disaster and a great loss, however, condoled with the families of the deceased and said the government needed to be more careful and pro-active to prevent a similar incident from happening again.

Quoting a report by the National Emergency Management Agency, NEMA, Tobun said that the building ought to have only four floors instead of six, according to the foundation of the house.

“But my concern is that we have town planning officers that should supervise buildings in the state, they are accomplices. There is no way someone would build a six-storey building instead of four and they would say they were not aware. I believe that they compromised standard.

“Until they know that if they compromise in any way they are risking people’s lives, there would be problem. They should be more pro-active in the discharge of their duties,” he said.

But the Chairman of the Physical Planning Committee of the House, Mufutau Egberongbe, while defending the officials of the Ministry of Physical Planning and Urban Development, urged Nigerians to adopt voluntary compliance to laws as enforcement of the laws is supposed to be a last resort.

One of the challenges facing the ministry, according to Egberongbe, is the lack of adequate staff.

“How many are the staff of the ministry to go round Lagos when buildings are springing up on a daily basis? Voluntary compliance to laws should be our primary responsibility,” he said.

He said the government officials would have faced heavy criticisms from people if they had decided to implement the law to the letter in relation to the building, adding that it even costs the government money to carry out demolition of structures.

To him, if the church had done what it should do, the incident would have been averted.