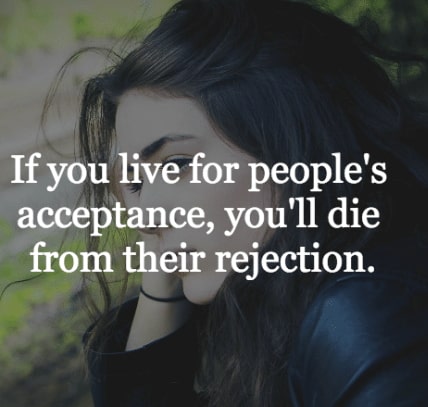 Seeking Validation From Others Invalidates You! Stop Waiting For People’s Acceptance, Live Your Life On Conviction

If You Live For People’s Acceptance, You Will Die From Their Rejection

“The only permission, the only validation, and the only opinion that matters in our quest for greatness is our own”-Steve Maraboli

“If you live for people’s acceptance, you will die from their rejection.”

Madonna Ciccone said, “Poor is the man whose pleasures depend on the permission of another.”

I have observed that the greatest hindrance to living a fulfilling life is being ‘stucked’ on other people’s opinion and acceptance.

You must get used to the fact that people will sometimes abandon you; you are the only one that cannot abandon you!.

There are two things that we can perpetually live on: ‘Acceptance’ or ‘Conviction’.

Great people live on the latter while the former is meant for lesser souls.

Live on conviction and stop waiting for people’s acceptance.

Steve Jobs once said,“Don’t let the noise of other’s opinions drown out your own inner voice. And most important, have the courage to follow your heart and intuition”.

One of the major technological revolutions that has drastically change the way we communicate is the invention of the telephone. From the manual to the recent mobile telephones, it is in no doubt that this invention has redefine communication.

The story of this mysterious gadget might never had sufficed or at least delayed if not for the tenacious belief of one man in the midst of the world’s unbelief. One afternoon, a tall gaunt looking individual came up to Mark Twain’s house carrying a strange contraption. It turned out to be an invention in which the inventor asked Twain to invest. “It won’t cost you much money”, he urged. “You can have as large a share as you want for a hundred dollars.”

Mark Twain with a smile of superiority said that he was not interested in such dubious contraptions and politely ushered the visitor out. The inventor was none other than Alexander Graham Bell, the inventor of the telephone!.

Many people have missed great and golden opportunities in life because of contempt and wrong assumptions. Don’t ever whittle down your belief and conviction no matter who is not believing in it. When you have your own approval, you never need anyone else’s.

Seeking validation from others invalidates you. Living for the approval of others is a destructive road that you don’t want to go down.

You are not here to gain the acceptance of others, you are here to fulfill purpose.

Myles Munroe once said, “Most people don’t know who they are, so they die as someone else”.

Don’t try to be someone else in order to gain people’s acceptance. Your value does not decrease based on someone’s inability to see your worth. The fear of losing friends or not fitting in is bigger than the fear of being someone that you aren’t.

Many times, we are too scared to be ourselves because that might mean risking your friendships with people. What we should actually fear is living our whole life as someone else. There is one thing you must never make apologies for in life-being yourself! Freedom is being you without anyone’s permission. Make no apologies for following your heart; a man on a mission needs no permission.

In order to maintain a healthy self-image,we must seek only for inward acceptance. An internal security will always produce an outward stability. Henri Frederic Amiel once said, “The man who has no inner-life is a slave to his surroundings.”

Almost 80% of self-esteem and self-abuse issues are a result of people looking out for acceptance!.

The hardest battle you will ever have to fight is the battle to be yourself. Wanting to be someone else is a waste of who you are! We must spend more time with people and in places that give us the privilege of being ourselves. He who trims himself to suit everyone will soon whittle away.

People that will live a fulfilling life must not only live above the acceptance from others, they must also learn how to handle rejection.

One of the most demeaning psychological state is being in a state of rejection. Overcoming this state will put a high demand on our renewed perspective towards it.  Sometimes, the greatest thing that will ever happen to some of us is rejection!.

The reason has been that most times, rejection is simply redirection. When people continually reject you, it is because God is redirecting you. One of the core secrets of great people is in their ability to handle and overcome rejection without harboring any form of bitterness.

Don’t ever give in to people’s rejection, rather ask God to redirect you to your place of destiny fulfillment.

When you live your life on people’s acceptance, you have pitiably marked yourself on a journey to oblivion. Never live on people’s acceptance. Live on the pursuit of your dreams, purpose, vision, passion and inner fulfillment. There will always be someone who can’t see your worth. Don’t let it be you! When you start seeing your worth, you’ll find it harder to stay around people who don’t.

In his electrifying poem that has held the world spell-bound for ages, Robert Frost gave one of the most amazing quotes that I have always fallen back on in times of critical decision making.

He said, “Two roads diverged in a wood, and I took the one less travelled by, and that has made all the difference”.

I want to reach out to as many that have been talked out of their passion and those that have neglected their dreams for a lesser life.

Hold tenaciously to your inner belief, and stop attaching your life to people’s acceptance.

QUOTE OF THE WEEK: You may succeed if no one else believes in you, but you will never succeed if you don’t believe in yourself”-John C. Maxwell

Continue Reading
You may also like...
Related Topics:adebambo, articles, gbenga

Dreams Become Regrets When Left In The Mind; Visions Without Execution Are Just Hallucinations. Take Action Now!
Be Part Of The Solution, Not The Problem