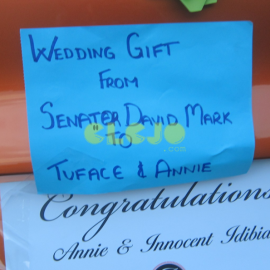 You must have come across stories on the web claiming that Nigerian Senate President David Mark gave 2Face Idibia a 47 million naira Ferrari car as wedding gift, please debunk such story.

Senator David Mark himself has distanced himself from the story calling it a wicked lie.

Below is what his spokesman, Mr Kola Ologbondiyan said in regards to the rumour

“The President of the Senate, Senator David Mark, did not give a N47m Ferrari car to Tuface Idibia contrary to wild stories being circulated on social sites.”

“The President of the Senate, Senator Mark, did not make a car donation of any kind to Tuface before departing Nigeria for Ecuador neither did he purchase nor send any car to Dubai as a wedding gift for the musician or his wife”

Where do people get this kind lie lie story?  Na wa o.

Join us on Facebook @ https://www.facebook.com/naijagists for timely news udpates